China accounts for about one-quarter of Airbus and Boeing single-aisle aircraft deliveries annually, and is set to be their second-largest market outside the USA, so it’s no surprise that the competition between them is fierce in this huge market.

There are 1,085 Boeing and 1,063 Airbus aircraft in service in China, according to Flightglobal’s Ascend Fleets database. The majority of these jets are narrowbodies, comprising theAirbus A320andBoeing 737families.

Both leading airframers are anxious to portray themselves as dedicated partners in China. Airbus inked an agreement in 2005 with the Chinese government to establish a final assembly line in Tianjin, and expects to make its 200th A320 family delivery from the plant in December.

Boeing insists it has no plans for assembly in China, but underscores its “deep commitment” to its partnerships with airlines and the Chinese aerospace industry, stressing that every Boeing aircraft has Chinese content.

Meanwhile, Boeing is expecting the strong domestic market, airlines’ focus on international expansion and new market entrants to drive China’s demand for more than 6,020 new aircraft over the next 20 years, the majority of which will be for growth. Of these aircraft, 4,340 will be narrowbodies.

Airbus is forecasting that the Asia-Pacific will require 12,253 new aircraft over the next 20 years, and that China will be the key market from the region. In fact, Airbus sales chief John Leahy says China is poised to displace North America as the world’s largest domestic market in terms of passenger traffic within a decade.

As for the future, Airbus and Boeing are confident in their strong track records and powerful support operations but concede that their duopoly will not last forever. Not surprisingly, they expect a challenger from China. As Boeing China president Ian Thomas put it: “If I were to bet on who’s going to come out as the third big OEM in this business, I’ll put my money on China.

“It takes national will, political will, deep financial resources and deep reserves of talent [to build an aircraft], and China has all of those in abundance.”

Naturally, one of the factors driving the growth of the Chinese aerospace industry is the dramatic growth over the last three decades of its airline industry. This graphic shows where the main players are based in Greater China (including Hong Kong and Tiawan), when they were established and the number of aircraft they have in their fleet and on order. Together, their airliner backlog amounts to almost 500 aircraft. 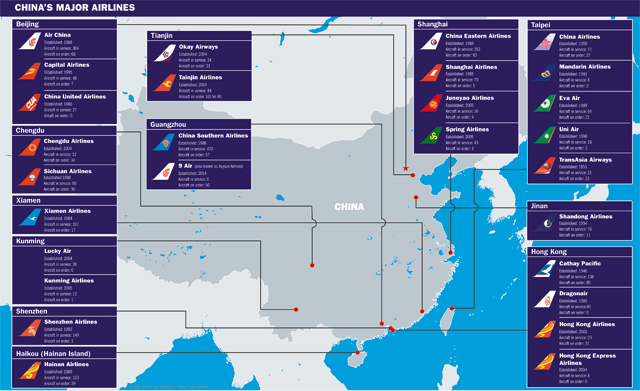 China is slowly emerging as a centre of commercial aerospace manufacturing, both as a partner or supplier to Western airframers or with home-grown programmes such as the AVIC ARJ21 and Comac CRJ919 and the Xian MA700 . Our map details where the main facilities are based and what they produce. 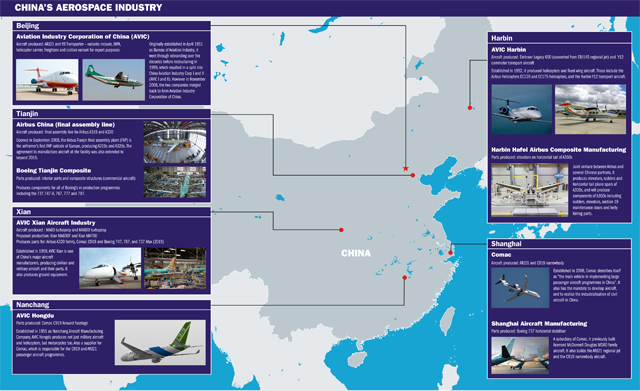