Investigators have concluded that cracked solder joints on a circuit board were the main contributor to the fatal crash of Indonesia AirAsia flight QZ8501 on 28 December 2014.

Indonesia's National Transportation Safety Committee has delivered its final report on the accident, which involved an Airbus A320 registered as PK-AXC and resulted in the deaths of 162 passengers and crew.

Following each of the first three master cautions, the crew performed ECAM procedures. After the fourth warning however, the NTSC says that the flight data recorder "recorded different signatures that were similar to the FAC CBs [flight augmentation computer circuit breakers] being reset, resulting in electrical interruption to the FACs". 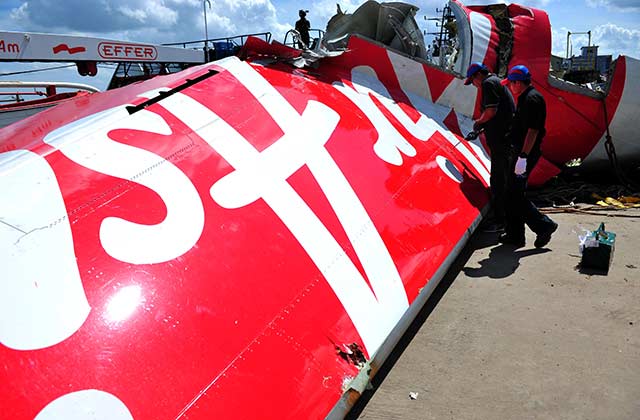 As a result, a fifth ECAM message warned of dual faults to the FAC, triggering a sixth master warning, after which the fly-by-wire system switched to alternate law, under which several flight envelope protections and autothrust were not available. That also resulted in the rudder deflecting 2° to the left, resulting in the aircraft rolling into a bank of up to 54°.

"Subsequent flightcrew action resulted in inability to control the aircraft in alternate law, causing the aircraft [to depart] from the normal flight envelope and entering [a] prolonged stall condition that was beyond the capability of the flightcrew to recover," says the NTSC.

As the crew attempted to recover from the stall, the aircraft reached an altitude of 38,500ft and a roll angle of 104°, after which it descended rapidly before crashing into the Java Sea.

The investigation found that during the flight, the cracking resulted in a loss of electrical continuity to the RTLU, leading to its failure.

Weather and flight authorisations were not contributing factors to the accident, the NTSC adds.

The committee has recommended that Airbus develop procedures that allow pilots to better deal with multiple problems during flight to reduce distractions, and that pilots undertake compulsory upset-recovery training.