AeroVironment has completed assembly of its first HAWK30 high-altitude pseudo-satellite (HAPS) and started manufacturing a second example in April 2019.

The company is building the solar-powered flying wing for HAPSMobile, its joint venture with Japanese telecommunications firm SoftBank. It took the company about 24 months to complete the first aircraft at one of its facilities in Simi Valley, California.

Softbank believes the HAWK30 could be providing service as soon as 2023. A follow-on variant of the aircraft, dubbed HAPS50, is also in the pipeline. 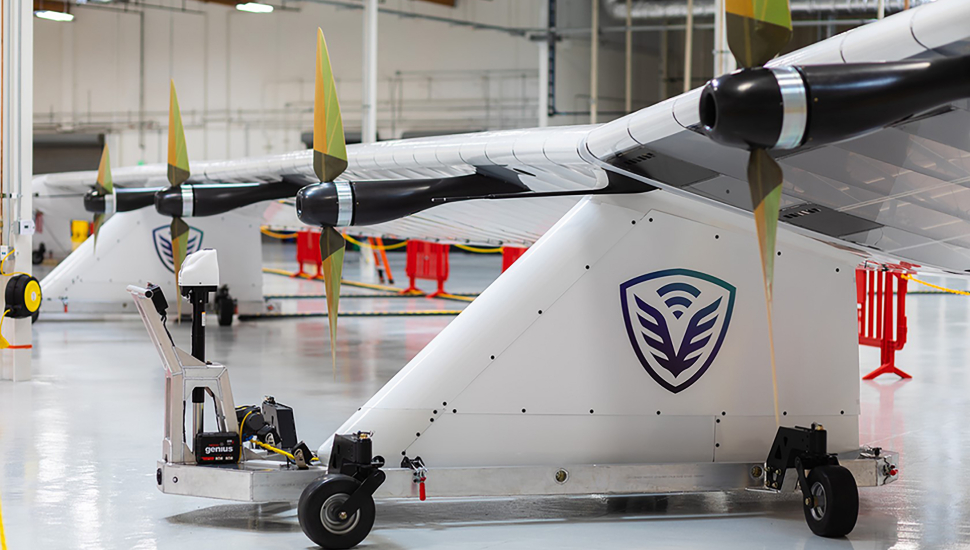 The solar-powered HAWK30 has a wingspan of approximately 79m (260ft), is propelled by 10 electric motors and carries lithium ion batteries. It has a cruise speed of 59kt (110km/h). The unmanned air vehicle (UAV) is designed to carry cellular network transmitting equipment aloft for up to 6 months at a time in the stratosphere – about 65,000ft.

At that altitude, the aircraft is above the clouds enabling it to generate maximum solar power and enabling it to beam cellular data down to Earth over an area of about 3.14 million ha (7.76 million acres). For example, it would take approximately 40 HAWK30s flying at once to provide internet coverage for all of Japan, Softbank estimates.

Since, the company says the basic underlying technology of HAPS aircraft – solar panels, batteries and electronic payloads – have become smaller, lighter and more powerful. As a result, a HAPS-based cellular network now appears to be more feasible than ever before.

“The efficiency, the flexibility and the cost of solar panels has changed dramatically,” says Steve Gitlin, vice president of corporate strategy for AeroVironment. “The ability to integrate different solar panels into different kinds of designs has improved.”

Ultimately, the HAWK30 could provide internet access to people living in remote areas or to areas that have had their communications infrastructure destroyed by a natural disaster, says AeroVironment. The company thinks it could also supplement areas that already have coverage via cell towers. The company declines to say what market it believes would be most lucrative.