AeroVironment to integrate Switchblade and Shrike 2 onto armoured vehicles

The company aims to have its UAVs included as part of General Dynamics' bid for the US Army Next Generation Combat Vehicle and US Marine Corps Armored Reconnaissance Vehicle programmes, it announced at the Association of the US Army conference in Washington DC on 8 October.

AeroVironment plans to be able to vertically launch its Shrike 2 UAV from a platform atop an armoured vehicle, flying the aircraft ahead to scout and provide targeting coordinates of enemy positions. The Shrike 2 uses three thrust-vectoring rotors to take off vertically, propellers which then rotate for horizontal flight. 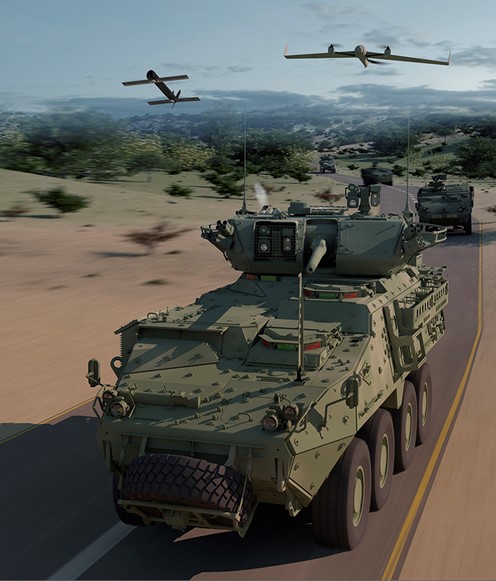 Interest in adding UAVs to armoured vehicles came initially from the USMC, who wanted an aircraft for its Armored Reconnaissance Vehicle programme, says David Sharpin, vice-president of tactical unmanned aircraft systems for AeroVironment. The UAV must be able to launch and land on a moving vehicle.

The Shrike 2 has not been sold yet as it is still in development, though AeroVironment expects to make its first sale of the UAV in the third quarter of 2019, says Sharpin. The thrust-vectoring system on the Shrike 2 was developed by startup FlightWave Aerospace Systems.

General Dynamic’s armoured vehicles will also feature a battery of nine Switchblade tactical missiles, a propeller-powered loitering drone with a camera and grenade-sized munition that AeroVironment has sold to a variety of US military branches as a precise anti-personnel weapon.

AeroViroment’s Sharpin says his company is also working on developing an anti-armour version of the Switchblade, which would be larger to carry a bigger munition.