Airbus Defence & Space is working towards the certification of its Tanan rotary unmanned air vehicle demonstrator, which could be a consideration for the Royal Navy as it assesses its maritime surveillance options.

The Ministry of Defence is expected to make announcements regarding its maritime patrol requirement when it releases its Strategic Defence and Security Review in May. Industry is speculating as to how this role will be filled: with a manned or unmanned aircraft, or a combination of both.

“The argument for a manned maritime patrol aircraft – especially for an island nation with a large navy – is that the requirement is overwhelmingly there,” explains Nigel Chandler, head of business development (maritime) for Airbus Defence & Space.

However, when maritime patrol aircraft and satellite coverage is not available, the ability to deploy a platform such as a rotary wing UAV at-sea is beneficial for surveillance, Chandler adds.

“The Royal Navy is aware of the Tanan and we’re keeping them up to speed,” he notes. “The navy has a desire for greater organic surveillance from a ship.” 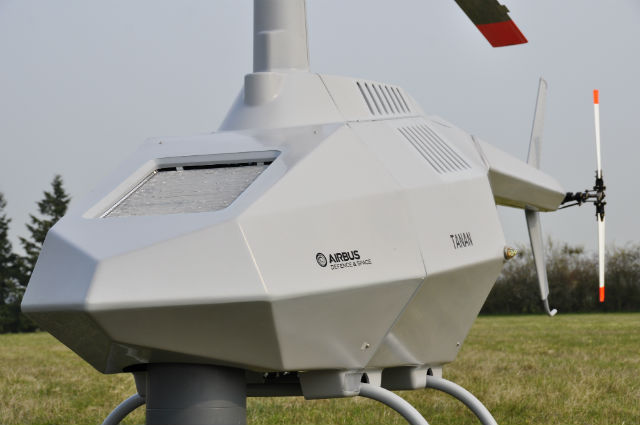 The RN is relatively new to operating UAVs, having only contracted Insitu in 2013 to provide intelligence, surveillance and reconnaissance services using its fixed-wing ScanEagle.

Chandler notes that the ScanEagle is a “force multiplier” but does not have the dual payload capability offered by the Tanan, which includes both synthetic aperture radar and electro-optical sensors.

“It [Tanan] doesn’t displace anything and it isn’t the cost of something like a [Northrop Grumman] Fire Scout,” Chandler says.

ScanEagle is provided to the navy on a services basis, and although Chandler could not comment on the capacity a contract for Tanan might provide, he notes that the company has experience in offering defence services to the UK through its Skynet communication satellite constellation.

Meanwhile, the company is working on the next generation of its long-endurance Zephyr 7 pseudo satellite UAV – the Zephyr 8 – which “will see advancements this year”.

Zephyr 7 achieved an 11-day flight in 2014, after which it became the first of its type to receive an MoD military designation – the PS001.

Chandler admits that the UAV has a “limited payload” at present, carrying some 5kg (11lb), but adds that “there is potential”.

“The company view is that the Zephyr is proven,” he notes.