Aurora Flight Sciences has won a $13.7 million US Navy contract to complete development of a prototype system that allows an untrained operator to land an unmanned helicopter using a software application on an Apple iPad mini.

The Office of Naval Research selected Aurora’s proposal based on the Boeing Unmanned Little Bird over a rival bid from the Lockheed Martin/Kaman unmanned K-Max team.

The appeal of the unmanned K-Max is that it keeps helicopter flight crews or truck convoys from having to attempt dangerous resupply missions to remote outposts.

But the unmanned K-Max cannot land by itself at the destination site, so a specially-trained crew must be kept at the outpost to identify the landing zone and remotely steer the helicopter to the ground.

The AACUS programme seeks to eliminate the need for a specially-trained ground crew, using sensors, software-based decision algorithms and a simple iPad interface.

Two years ago, ONR selected both teams in phase 1 to develop the such a system and demonstrate it in a competitive fly-off, which was held in late-February in Quantico, Virginia. 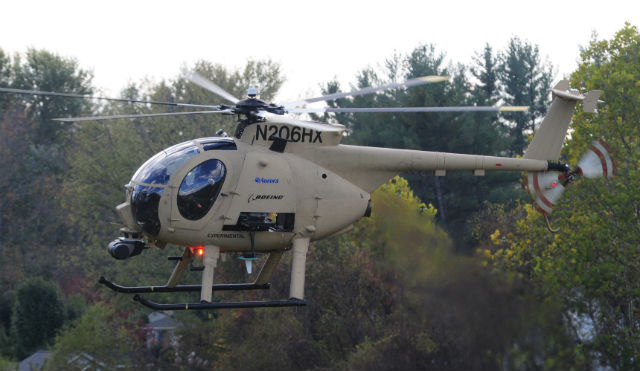 Aurora modified the Unmanned Little Bird with a LIDAR and electro-optical sensors and new control software. As the aircraft flies to its destination, the LIDAR and cameras scan for obstacles in the airspace. An operator at the destination site, meanwhile, selects a landing zone for the aircraft.

As the helicopter arrives, the AACUS system scans the landing zone and decides whether various features – slope, vegetation, obstacles – are compatible with its requirements. If not, the aircraft scans the entire area and sends the operator three feasible alternatives.

The next step is the 13-month phase 2 of the AACUS programme. Aurora will continue to develop the software and sensors to determine any flaws or limitations.

Afterward, the ONR must decide whether to proceed with a phase 3, which involves modifying an existing rotorcraft in the USMC’s inventory with the AACUS system. Candidates include the Bell Boeing MV-22 and the Sikorsky CH-53.

The same system also could be adapted to serve as a sophisticated autopilot for a fixed-wing aircraft.

Making the AACUS system operational could require design changes. The sensor and processing package used on the Unmanned Little Bird weighs more than 200lb. An operational system may have to be lighter and more robust.

The Optimus software developed by Lockheed in first phase of the AACUS programme can be adapted to other aircraft and missions, the company says.

Lockheed also notes that is demonstrating similar technologies under a US Army contract called the autonomous technology for unmanned air systems (ATUAS) programme.

“We remain confident that the Lockheed Martin autonomous technologies will be vibrant in both the military and commercial operating environments,” the company says.