The recently-appointed lead for the US Naval Air System Command’s unmanned aviation branch has prioritised sensor capability and controlled autonomy as his two main concerns for the future.

Rear Adm Mark Darrah, programme executive officer for Unmanned Aviation and Strike Weapons, says the navy is driving towards an “every platform is a sensor” approach, all of which have to be part of a larger, networked system.

“We are ensuring that we focus more on the payload and the sensor capability than the platform itself,” Darrah says. “We’re very driven to network all of these sensors to generate common pictures and the ability to generate effects from the information.”

Darrah assumed the post in October 2014 and says his priority is to make sure that the required information can be collected from a sensor positioned at the correct point, a mission suited to unmanned aircraft because of their endurance.

“The other part that is a challenge that I need to think through is the autonomy piece,” Darrah says. “Deterministic autonomy – what I mean by that, is we are building envelopes for the systems to operate in. This is informing the system on how it should behave, and then it has choices between that range of instructions.” 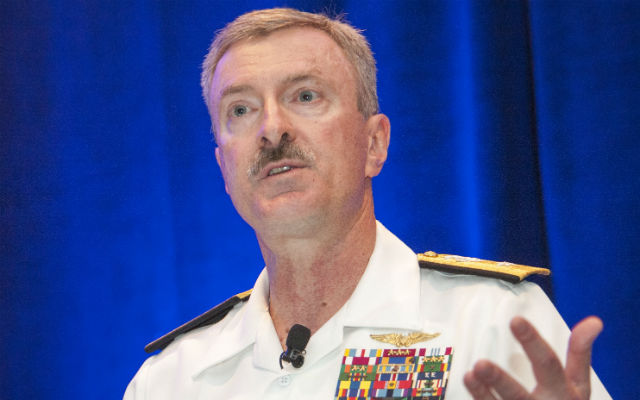 Darrah uses the recent autonomous air-to-air refueling of the navy's Northrop Grumman X-47B as an example.

The system was programmed to identify a certain picture before connecting to the tanker, however when it approached the drogue on an initial trial the images did not match and therefore no fuel was uploaded.

“We thought that the edge of the basket should be in the field of view, but what we figured out is that it shouldn’t, so in 12h we programmed those cameras to tell it to see something different, and once it did, it worked,” he adds.

“So that is what I’d call deterministic autonomy. We told it to do something, and when it didn’t see the parameters it needed, it stopped. Full autonomy though…that’s way out there.”

Darrah notes that the ultimate aim of the navy is to incorporate its family of UAVs into all sea-based operations in the future: "We are determined to put as many unmanned systems as we can on navy ships," he says.