Boeing envisions a future with electric-powered aircraft that cut the costs and emissions of jet fuel propulsion, but its executives know even their vast company cannot get there alone. It faces the same limits of battery technology as other companies designing electric and gasoline-electric hybrid aircraft, so is relying on investments and partnerships in addition to its internal projects.

These companies also face the common challenge of consumer scepticism about electric flight. At the 2019 Paris air show, Boeing will try to rally the aviation industry around its vision by showcasing two electric-powered vertical take-off and landing (eVTOL) aircraft. Both aircraft, one designed for cargo and the other for passengers, have already taken to the skies in test flights.

Boeing chairman Dennis Muilenburg said during a conference in March that "the market is wide open" for cargo and autonomous passenger aircraft and that it will "happen faster than any of us think".

With that in mind, Le Bourget this year will include a test example of Boeing's Passenger Air Vehicle (PAV) and a scale model of its smaller Cargo Air Vehicle (CAV). Both are lifted by several propellers and powered by batteries, but the larger PAV is 9.14m (30ft) long and 8.53m wide and designed to carry passengers.

The manufacturer is involved with "a whole spectrum of activity" on electric propulsion but "there is a much nearer window of applicability" for smaller aircraft including the CAV and PAV, says Pete Kunz, chief engineer at Boeing’s NeXt urban air transport technology unit. "A lot of our vision is focused on five, 10, 15 years [ahead]," he says of electric flight. "In many places we are trying to be an enabler of this technology."

In terms of regulation and risks he says, "smaller platforms have a path that is a bit more clear", citing innovations and increasing public acceptance in the small drone sector. The market is "a little more nascent" for commercial aircraft that are fully electric or assisted by some type of electric propulsion, but he says, "we are active in that space".

Fully electric commercial flight is the goal of one Boeing HorizonX Ventures investment: Zunum Aero, which is not scheduled to exhibit at Le Bourget. Neither Boeing nor Zunum would share updates about the company's progress on developing a battery-powered commercial aircraft that it aims to market to regional airlines some time in the 2020s. Zunum's investors also include JetBlue's Technology Ventures, and in October 2018 the start-up chose Safran to develop a generator for its regional aircraft. 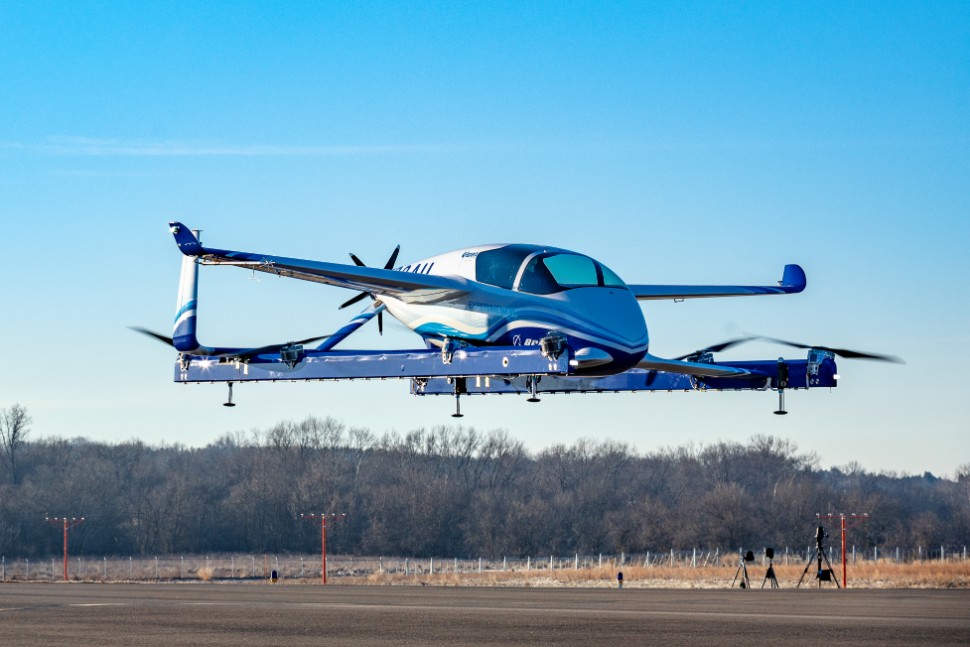 To spur progress on electric propulsion, Boeing offers its partner companies and investments access to its vast infrastructure and engineering experience of "how to build safe architectures, how to bring these technologies together into a vehicle and how to bring them together to meet the customer needs", Kunz says. “It is important to have a wide view" seeking out companies that develop electric aircraft propulsion because many companies are working to develop the necessary technology and it's "too early to pick a winner", he adds.

Aurora Flight Sciences, purchased by Boeing in 2017, is what he calls "a non-integrated subsidiary" because few structural changes have been made besides directing "focus of effort" while granting access to the vast resources of its new parent company. Aurora designs have evolved into the PAV since its acquisition, and with Boeing engineers in January the team reached a milestone with a hovering test flight of the PAV. Aurora and Boeing would not give updates about the next challenge of transitioning the aircraft from vertical to forward flight – a step that had been difficult for such aircraft during past decades before advances in distributed electric propulsion simplified the process.

Electric propulsion offers "system simplicity" because an electric motor has fewer moving parts and the potential for a longer lifespan than a thermal engine reliant on a heavy fuel tank, Kunz says.

All manufacturers developing electric or hybrid aircraft will have to prove their safety to both regulators and the flying public, but eVTOL aircraft have several factors in their favour. "To fly you need to be relatively light," Kunz says, so aircraft like the PAV will require less battery power than larger, heavier hybrid or fully electric commercial aircraft.

Energy is also less challenging for eVTOL aircraft because many designs intend for them to be flown on short trips – the PAV's range is 43nm (80km), shorter than the distance covered by the average regional aircraft flight. Through its partnership with Uber, Boeing aims to market the PAV for aerial ride-sharing flights to ferry people between pre-set landing pads in cities and suburbs through an Uber Air mobile application. If the US Federal Aviation Administration certificates VTOL aircraft, Uber aims for passengers to book flights in 2023, starting in Los Angeles and Dallas/Fort Worth.

Electric aircraft designed for cargo transport such as Boeing's CAV have "a lower risk profile because you are not carrying passengers", says Kunz – although he stresses: "That doesn't diminish the need for safety on those platforms because they are relatively large."

Dozens of companies have concepts for some type of VTOL for cargo or passenger flight, including larger hybrid electric designs assisted by a fuel tank pending advancements in battery technology, according to a Vertical Flight Society database.

Boeing and its competitors face the same difficulties over how to make electric propulsion safe, affordable and socially acceptable. A wide range of industries have chosen lithium ion as their preferred battery type but integrating batteries for aircraft propulsion requires different technology compared with designs for smartphones or electric cars.

Mining materials for lithium ion is not environmentally friendly and those batteries have a risk of overheating or even starting fires if they are not packaged safely. In spite of this, "lithium ion is the best we have right now", says Herve Blanc, Safran's general manager of electric power.

Kunz agrees that battery technology is "on a trajectory that is sustainable", but barring an unforeseen change at the chemistry level it will be more of a "slow creep".

Boeing and Safran each invest in companies innovating battery chemistry and share information with the rest of the industry to contribute toward the common quest for stronger, safer, longer-lasting batteries. Safran invests in OXIS Energy, which designs lithium-sulfur cells, while Boeing invests in Cuberg, which is trying to improve energy storage and reduce the volatility of lithium-ion units.

Some technology is a more closely guarded secret, such as battery management technology to integrate with the aircraft power systems, including software to monitor power supply.

While "there is no free lunch" and energy for batteries must come from somewhere, Kunz says shifting generation away from an aircraft towards ground infrastructure could be more efficient and environmentally friendly as powerplants become more renewable. Batteries also have to potential to reduce waste because they can be used "multiple times in multiple places" across their life-cycle, whether by recharging them for different aircraft or by selling them to other industries on "a used battery market", says Kunz.

Safran is also part of a VTOL project, the Bell-built Nexus aircraft, which would likewise be among the aircraft Uber would include in its air taxi ecosystem.

Smaller electrical aircraft such as VTOL types are stepping-stones "to validate and develop the next generation of technology for bigger platforms", Blanc says. Safran is designing turboshaft-based hybrid electric propulsion to power the six propellers of the Nexus, which, unlike the PAV, would be assisted by a gas turbine.

"We are working on a number of projects that have not been disclosed," Blanc says, but Safran will also showcase numerous electric propulsion technologies at Le Bourget, including electric motors, generators and power management systems.