Boeing is planning to demonstrate the autonomous capabilities of a number of its unmanned systems during maritime surveillance operations.

Systems under consideration may include the RQ-21A Blackjack or ScanEagle unmanned air vehicles made by its Insitu subsidiary, the Camcopter rotary UAV that it markets in the UK and USA on behalf of manufacturer Schiebel, plus the Liquid Robotics Sharc unmanned surface vehicle.

“All of the building blocks are there… [and] next year we’re going to put it all together and show what it does,” Egan Greenstein, senior director of autonomous marine systems at Boeing, told media on 19 October. “There is uncertainty on how this will play out,” he adds, noting that there will be some anticipated teething troubles in bringing the different systems together.

One element of the testing will be to allow a system to decide what is the appropriate information to relay. This will allow for “machine learning” and give the systems more authority to categorise the importance of collected data.

“I don’t want my autonomous system to call back every time it sees something,” Greenstein says. “That [level of autonomy] is where these systems are going.”

Boeing intends to perform a flight test in the coming months of the computer system that will support all of the cross-domain testing, but the manufacturer has yet to decide if it will demonstrate the capability internally or as part of a separate naval exercise. It has set itself an internal deadline of the third quarter of 2017 to carry out the trial.

A number of demonstrations using Boeing’s aerial assets and the Sharc – for which it has a teaming agreement with the manufacturer – have been carried out previously, including a November 2014 test during which Sharc and a surrogate ScanEagle demonstrated a data exchange. The surface vessel has also proven that it can exchange data with Boeing’s maritime surveillance aircraft. 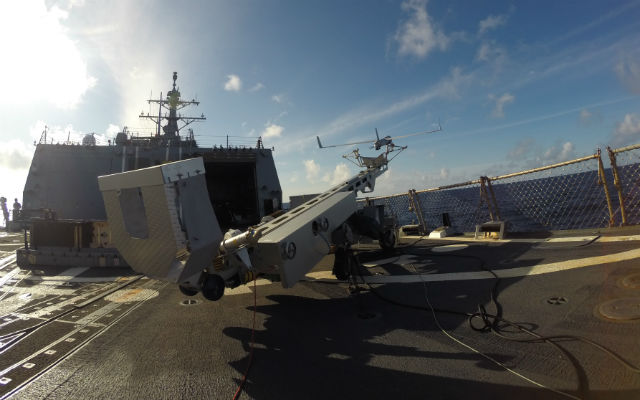 Insitu also hopes the future deployment of its ScanEagle aboard a US Coast Guard Legend-class cutter could lead to the adoption of the system with its new visual detection and ranging (ViDAR) sensor.

An initial system without the new sensor should deploy with the coastguard in 2017, and a request for information for eight additional ScanEagles has been released.

It is understood that funding limitations have prevented its full-scale adoption so far, but Suzanne McNamara, vice-president of business development for Insitu, says the USCG has sought to acquire the UAV for some time.

The Royal Australian Navy has been operating ViDAR-equipped ScanEagles for evaluation of the capability since July.