California-based Advanced Tactics plans to attempt the first flight test in a few weeks of the Black Knight Transformer, an unmanned vertical take-off and landing (VTOL) aircraft designed for the medical evacuation mission.

The vehicle, resembling a Soviet-era commuter bus with eight fixed-pitch propeller-driven engines, is designed to reach urban areas where helicopters are unable to land.

“You just can’t land a helicopter right next to the the guy and pick him up because it’ll be shot down,” Rustom “Rusty” Jehangir, chief engineer for Advanced Tactics, explains. 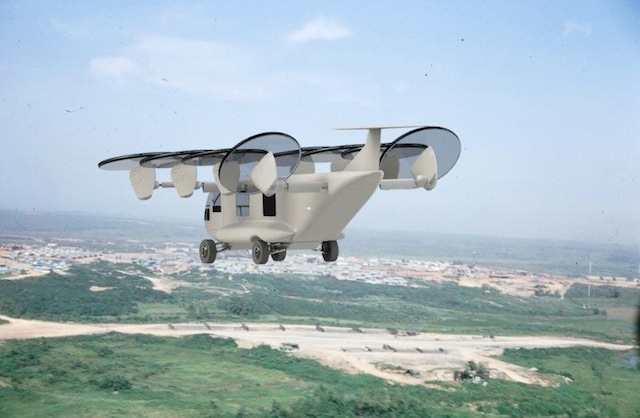 The Black Knight Transformer is designed to overcome this challenge by morphing into a road vehicle for close-in extraction. The 1,810kg (4,000lb) unmanned vehicle lands at a safe distance from the firefight, then retracts its rotor engines and drives to the casualties.

Both the US Army Telemedicine & Advanced Technologies Research Centre, in Fort Detrick, Maryland, and the Marine Corps Warfighting Laboratory, in Quantico, Virginia, have shown interest in the operational concept and are backing the Advanced Tactics project.

Despite its ungainly look, the Black Knight Transformer sports 76.2cm (30in) tyres and can clock 113km/h (70mph) on a city street.

In mid-December, the Advanced Tactics team took the vehicle for its first test drive out in the Anza-Borrego Desert, northeast of San Diego. “Our driving tests were done in rough terrain and sand, and it performed pretty well in those situations,” Jehangir says.

Now the team is planning a short, tethered flight test sometime between late January and February. Should that go well, Advanced Tactics will continue to “push the performance envelope” on the gas-powered technology demonstrator.

The ultimate goal is to build a sleeker aircraft with turbo-diesel proprotors that can ferry a maximum payload of 454kg up to 124km (230nm).

No programme of record is scheduled, but company officials hope that a series of flight test successes with their demonstrator will convince military customers to fund “a more complete version that can be certified for military use,” Jehangir says.