According to Igo Licht, Elta’s vice-president of marketing and sales, the payload enables quick detection and identification of high frequency signals, creating an electronic order of battle picture and accurate geolocation.

Licht says the special antenna installed in the payload allows it to locate targets and listen to their communications systems.

He adds that the combination of this type of UAV with an HF COMINT payload is unique, and solves operational problems that armed forces and law enforcement agencies have in wanting to locate a target by communication emissions while verifying it by listening to the transmissions.

Licht says the combination of the rotary UAV and the COMINT payload will create a lot of interest, and there are already some potential customers for the package.

Meanwhile, Camcopter has completed another year of operations in support of the Migrant Offshore Aid Station (MOAS) project, a charity that monitors movements of people in the Mediterranean while fleeing war zones and saves them from drowning. 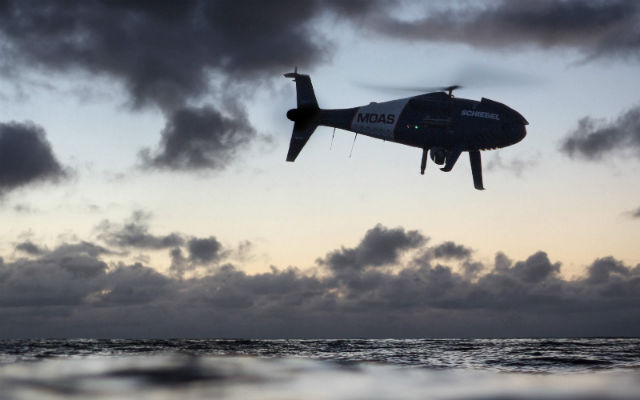 “The use of drones has been instrumental to MOAS’ successful humanitarian efforts,” the charity’s founder Christopher Catrambone says. “The Schiebel Camcopter S-100 with its take-off and landing capability on the 40m-long ship MY Phoenix, has been providing real-time daylight and infrared video, widening the view of the crew on-board and enabling them to locate migrants in distress even well beyond the horizon.”

This is the third year the UAV has supported the mission, which to date has helped save 30,000 lives, Schiebel says.