A year after the UK government canned an industry-led effort to develop the regulations and technology required to integrate unmanned air vehicles into national airspace, BAE Systems has offered the project a lifeline, announcing plans to invest £400,000 ($497,000) to restart development.

The Autonomous Systems Technology Related Airborne Evaluation and Assessment (ASTRAEA) programme was part-funded in increments by the government’s business department, but it elected to pull the plug in September 2015 to focus on smaller-scale initiatives.

However, BAE has decided to restart the initiative, and will begin flying the Jetstream 31 testbed (G-BWWW) originally used during ASTRAEA to continue testing the necessary technology and regulations. 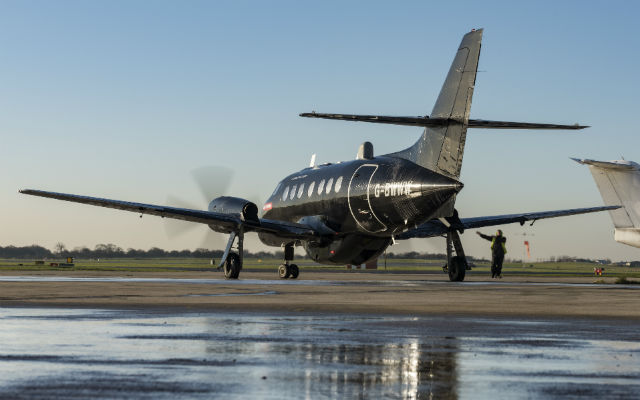 The company says 17 flights will be carried out to “prove the maturity and safe operation of autonomous air technologies controlled by a satellite communications [SATCOM]-based link”.

Flights will each last 1h 30min, and will involve two engineers on-board the aircraft working with air traffic control to move it through non-congested airspace from the company’s Warton, Lancashire site to Inverness in Scotland.

Once airborne, the aircraft will fly itself, with a UAV operator who holds a pilot’s licence monitoring the flights via SATCOM from the ground. The Jetstream will fly at 15,000ft and the flights will cover some 260nm (482km).

An aircraft identification antenna is installed on the tuboprop to detect transponder signals, while an in-cockpit camera linked to a computer allows it to detect hazards and different cloud types.

“The results of the trials will inform the direction of the company’s future unmanned aircraft programme, and the suitability of testing unmanned aircraft in the UK,” BAE says. “In the near future, these unmanned aircraft technologies may also be brought to market for use in commercial and military aircraft as aids to the existing crew.”