The agency did not disclose the date of the tests but described the demonstrations as recent, it said in a 19 November online notice. The tests were part of DARPA’s Collaborative Operations in Denied Environment (CODE) programme. The work took place at Yuma Proving Ground in Arizona.

UAVs that are able to work together to carry out a mission after losing contact with a human controller are seen as useful for penetrating enemy airspace that may be too dangerous for a manned aircraft and may be disrupted by communications, GPS or radar jamming. Such abilities could prove useful for the US Air Force Laboratory’s “Loyal Wingman” programme which aims to develop UAVs that can fly in coordination with manned aircraft and carry out strikes against adversaries, such as Russia or China, who have advanced fighter aircraft, electronic warfare, and anti-aircraft defences. 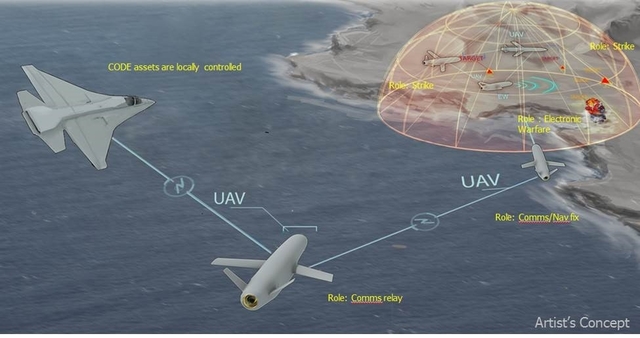 In the most recently disclosed tests, DARPA says the UAVs were initially flown with supervision from a human controller. When communications were degraded or denied, and human direction was cut off, the UAVs executed their mission autonomously. The drones worked together as a team, efficiently sharing information, cooperatively planning and assigning mission objectives, making coordinated tactical decisions, and collaboratively reacting to a changing, high-threat environment with little communication, the agency says.

“The test series expanded on previously demonstrated approaches to low bandwidth collaborative sensing and on-board planning. It demonstrated the ability to operate in more challenging scenarios, where both communications and GPS navigation were denied for extended periods,” said Scott Wierzbanowski, DARPA programme manager for CODE. “The demonstrated behaviors are the building blocks for an autonomous team that can collaborate and adjust to mission requirements and a changing environment.”

Further development of CODE will continue under DARPA until the conclusion of the programme in spring 2019, followed eventually by full transfer of the CODE software repository to Naval Air Systems Command, the agency says.