The US Defense Advanced Research Projects Agency (DARPA) has picked four teams for its Gremlins project, which aims to launch volleys of small, low-cost unmanned air vehicles from bombers, cargo aircraft or possibly even fighter jets, and recover them via a Lockheed Martin C-130 transport.

Finely networked for coordinated assaults on well-defended targets, these “gremlins” would conduct a variety of missions like electronic attack or target geolocation, mainly as stand-ins for “conventional, monolithic platforms” such as manned fighter jets or expensive UAVs.

The proposals submitted by those competing industry teams “cover a spectrum of technical approaches”, the agency says. The awards begin the first of three programme phases, which could culminate in a proof-of-concept demonstration “of an air-launched, air-recovered, volley-quantity unmanned aircraft system”.

“We’ve assembled a motivated group of researchers and developers that we believe could make significant progress toward Gremlins’ vision of delivering distributed airborne capabilities in a robust, responsive and affordable manner,” says DARPA programme manager Dan Patt. “These teams are exploring different, innovative approaches toward achieving this goal.” 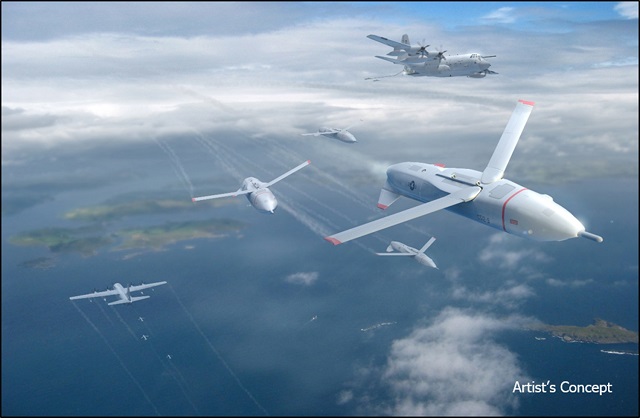 According to the broad agency announcement for Gremlins, posted in September, candidate launch platforms include the B-52 and B-1 bombers or C-130 turboprop. In-flight recovery is assigned to the C-130.

Each gremlin must fly out 300-500nm (555-926km) at high subsonic speeds after launch and loiter for 1-3h before turning back to the C-130 for recovery, the announcement notes. The flyaway cost per Gremlin air vehicle should not exceed $700,000, and it is designed for at least 20 uses.

Composite Engineering is the unmanned systems division of Kratos, which primarily builds aerial target drones for the US military, one of the largest being the catapult-launched MQM-178 Firejet. Kratos also runs a “confidential UAS programme” that will enter production between 2017 and 2019.

Dynetics develops rocket and satellite technologies, as well as "intelligence, sensor, missile and aviation solutions” for national security missions. It is an industry leader in aerospace research and development.

Lockheed, the world’s largest defence firm and manufacturer of the C-130 and F-35, brings its expertise in land, air, sea and undersea unmanned systems, including the secretive RQ-170, to bear on Gremlins.

DARPA has not announced the cost or timeline associated with Gremlins, but $15 million is allocated for the current fiscal year and another $31 million has been requested for 2017. Preliminary design reviews are expected in 2017, agency budget documents state.