A contract for leased unmanned air vehicle (UAV) services in support of the security mission in Ukraine is expected to be awarded imminently, an industry source reveals.

The Organization for Security and Co-operation in Europe (OSCE) recently issued a solicitation for bids which closed on Friday, 25 July. It stipulates the requirement for a turnkey UAV solution for deployment in the conflicted east of the country.

No further details were provided, although it has now been revealed that OSCE is seeking a vertical take-off and landing platform, preferably for round-the-clock monitoring operations, to be operational within weeks.

Vienna-based Schiebel confirms it has responded to the tender with its Camcopter S-100. However, it is unclear whether any other systems have been offered. Saab’s Skeldar UAV would fulfil the requirement, although the company declines to comment on any bid.

“[The solicitation] came out of nowhere. Our understanding is that they want something pretty much now – they don’t want something in a month’s time,” says Chris Day, head of capability engineering at Schiebel.

“Everything appeared very quickly – hopefully we’ll hear something later this week or early next. It wouldn't make sense to take two weeks reviewing it when they are saying they want something out there in a few weeks’ time,” he adds. 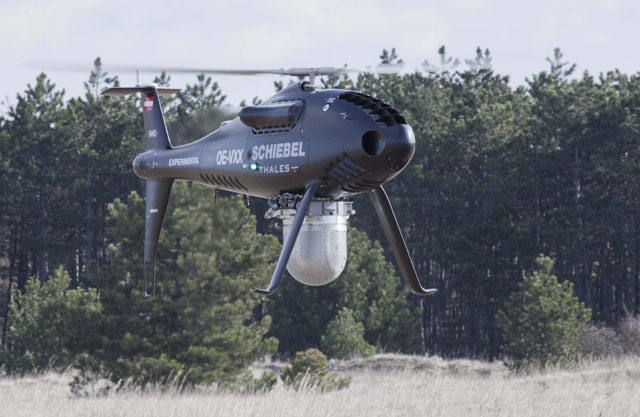 OSCE is unavailable to comment on the solicitation – and the date of its release remains unknown. However, sources claim it was issued suddenly, leading to speculation that the downing of Malaysia Airlines flight MH17 in the Donetsk region of Ukraine prompted the tender.

Day says Schiebel has offered two full systems – each comprising two aircraft plus associated ground control station – to provide the requested 24h coverage. The requirement for a rotary-wing aircraft is due to the lack of available airfields and runways in the area.

Schiebel says the tender requires electro-optical and synthetic aperture radar payloads, both of which the Camcopter can carry simultaneously, while staying aloft for around 6h.

The scope of the surveillance operation remains unknown, although it is thought the UAV will monitor the movement of cargo in the region.

“The ability to provide any sort of monitoring of access routes, ingress/egress and the movement of military matériel would be valuable to OSCE, hence the interest in acquiring or leasing UAV capability for this area,” says Doug Barrie, senior fellow for military aerospace at the International Institute for Strategic Studies.

“You could speculate that perhaps there is a deterrent element to this. You can imagine a situation where people would be less inclined to shift [materiel] around if they thought they were going to get caught,” he adds.

The system will be deployed for one month initially on a trial basis, although this is expected to be extended if the period proves a success.

No evidence has so far emerged of UAV use by either side in the Ukrainian conflict, and the size of the nation's unmanned inventory is unclear.