Lockheed Martin has demonstrated a new system that allows the unmanned K-Max helicopter to pick up a load of cargo with no human intervention on the ground.

The “autonomous retrograde” system demonstrated last week will remove any risk of using people to stand beneath the helicopter in hover mode to connect the cargo hook, says George Barton, vice-president of business development for Lockheed ship and aviation systems.

The concept is one of the critical upgrades aimed at making the Lockheed/Kaman autonomous K-Max more attractive as an alternative to manned helicopters and truck convoys for certain military missions, such as re-supplying remote and often hazardous bases. 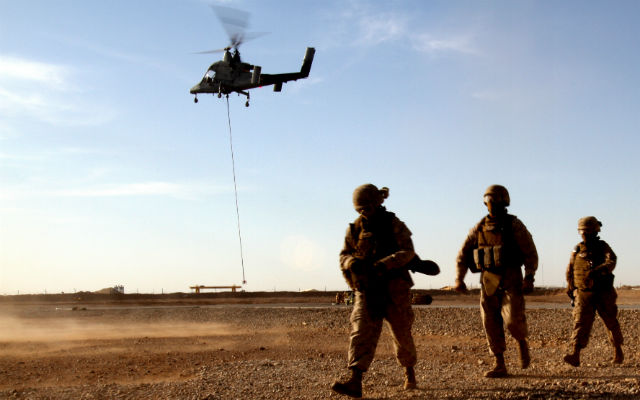 The system adds a new piece of equipment on the ground – a cargo container with a transmitter that broadcasts its location to the K-Max, Barton says.

The unmanned helicopter navigates to the location of a container and hovers directly above it. The cargo hook lowers into a funnel attached to the container, and captures the load, Barton says. It then flies back to the main operating base.

The unmanned K-Max has been operating in Afghanistan since December 2011, hauling 1.4 million kg over the first 15 months of the US Marine Corps-funded demonstration. The USMC extended the activity in August, but Barton says he believes the K-Max operation will be extended again by “other” US forces.

Meanwhile, the US Army has been funding a range of technology demonstration programmes to enhance the capability. Though discussions remain ongoing, there is no obvious path forward for funding a programme of record and restarting K-Max production.

Lockheed has discussed alternatives to a conventional acquisition programme with the army, such as a fee-for-service arrangement using either contractor-owned or government-owned K-Max aircraft, Barton says. Funding for such a programme does not appear likely “on the horizon”, he adds.

Discussions are also ongoing with foreign militaries around the world about the unmanned K-Max, Barton says.