Facebook not focusing on launch and recovery of Aquila UAV

Facebook has clarified that the absence of landing gear on its Aquila unmanned air vehicle is explained by the limited number of launches and recoveries that it will perform.

During the first flight of a full-scale Aquila prototype on 28 June at the Yuma Proving Ground in Arizona, it was evident that no landing gear was fitted.

Martin Gomez, director of aeronautical systems at Facebook, told a UAV conference at the Royal Aeronautical Society in London that the design has additional benefits through a reduction in weight and drag, lifting endurance.

Gomez says that launch and recovery are “deliberately difficult”, because they are not carried out frequently enough to justify investment and development.

The aircraft is designed to remain airborne for months at a time, so less than 1% of total flight time is dedicated to take-offs and landings, he says.

In addition, Facebook does not plan to operate the UAV from conventional airports, but if this was necessary, landing gear would be required, Gomez says.

Aquila is launched by being towed by an unmanned ground vehicle, and when it returns to earth after its batteries are exhausted, it descends “at bicycle speeds” and lands on skids.

“If you are constantly taking off and landing, that’s a lot of people required,” Gomez says. By reducing the number of launches and recoveries, “we are keeping crashes infrequent”, he says. 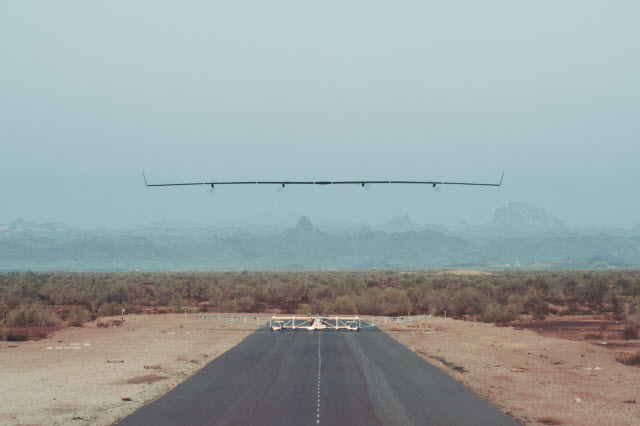 Aquila during the 28 June test

Mark Zuckerburg, the creator of the social networking site, has signalled that UAVs are a key investment for Facebook in a bid to increase access to the internet. It says 57% of the world’s population lacks reliable connectivity.

The problem is most acute in the developing world, where it is difficult and costly to build the ground-based infrastructure usually required.

Aerial provision of connectivity is the solution, Gomez says, with UAVs required because of their long endurance.

“It is simply a means to an end for us,” he says. “We don’t believe that UAVs are the answer to every problem.”

The carbonfibre 42m (137ft)-wingspan UAV travels at 70kt (130km/h). It uses solar energy both to charge its batteries during the day and to help it climb to an altitude of 90,000ft. During the night it then descends slowly until it reaches 60,000ft, when it switches to battery power.

Gomez says that solar panels will not be installed in the first few aircraft, and will be introduced to the test programme at a later stage.