Thales has revealed its new Fulmar X unmanned air vehicle at the Farnborough show, and is preparing to deliver the first two systems to launch customer the Malaysian Maritime Enforcement Agency by the end of the year.

Six of the UAVs were ordered by the agency in October 2015, and have been acquired to operate from its New Generation Patrol Craft vessel. All aircraft will be delivered by mid-2017. 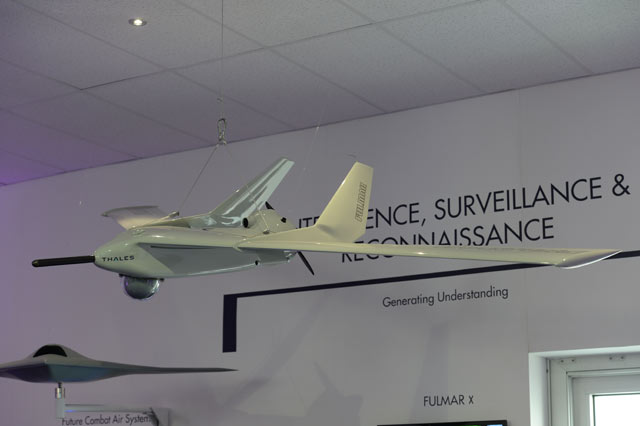 Speaking at the show, Matt Moore, UAV product line manager at Thales, said the 20kg (44lb) carbonfibre aircraft has a 43nm (80km) range and 3m (9.8ft) wingspan, and can carry a payload of up to 4kg. It is currently integrated with an electro-optical sensor, but Thales is planning to introduce a radar for the system with third party suppliers.

“It is a very light and small capability, but that is deceiving in terms of capability,” Moore says.

Fulmar X is launched by catapult and recovered by net to allow for ship-based operations. It also uses a Thales-designed heavy-fuel engine and a stabilised communications system. Ship-based developmental testing was carried out in Spain, including landing the UAV on a moving target.

The most tangible customer for Fulmar X after Malaysia is the Spanish military, and Thales expects a decision by the middle of next year.

The new UAV builds on the earlier Fulmar system, developed by the Spanish division of Thales.