The US Navy’s first operational Northrop Grumman MQ-8C Fire Scout unmanned air vehicle has been delivered to the service ahead of its first ship-board flight tests, due to begin on board the USS Jason Dunham destroyer.

The testing programme for the helicopter-derived UAV will then run until the summer, George Vardoulakis, vice president for medium-range tactical systems at Northrop says, ready to be operated by the end of next year.

Out of 70 of the type required by the USN, Northrop has been contracted to build 19 of the “C” model, including two test aircraft.

The MQ-8C derives from the Bell Helicopter 407 rotorcraft, which is a larger airframe than the Schweizer 330 that the model’s MQ-8B predecessor is based on. The company says that the “C” model can fly for double the time the “B” can while carrying three times the amount of payload.

The MQ-8C has been undergoing a test campaign since its first flight in October 2013, including most recently precision slope landing tests; electromagnetic testing, which assured compatibility with ship-based emitters; and an initial phase of dynamic interface testing, which looked at deck handling and communications networks. 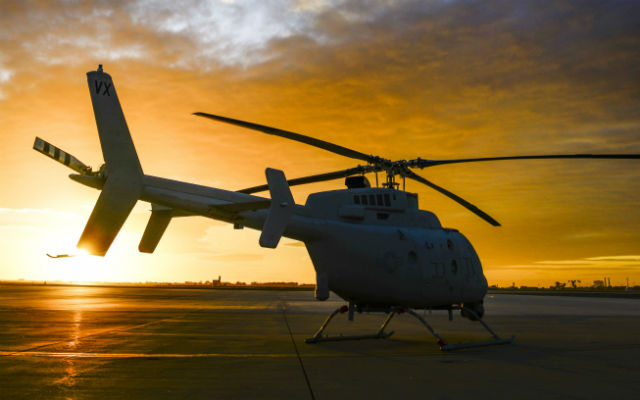 Meanwhile, the MQ-8B was deployed on board the USN’s new USS Fort Worth Littoral Combat Ship (LCS) when it embarked on its maiden voyage on 17 November with the Helicopter Maritime Strike Squadron 35 Detachment 1.

It was deployed alongside the Lockheed Martin/Sikorsky MH-60R Seahawk manned helicopter – LCS deployments are expected to operate with one of each of the rotorcraft types as part of the vessel’s surface warfare, anti-submarine warfare and mine countermeasures packages.

The Fire Scout will complement the MH-60R by extending the range and endurance to enhance maritime domain awareness, the navy says, while the deploying aviation detachment will consist of 24 personnel that are qualified to operate or perform maintenance on both the MH-60R and the MQ-8B.

USS Fort Worth will head for the 7th Fleet area of responsibility that spans from west of the international date line to the west coast of India, the navy says.