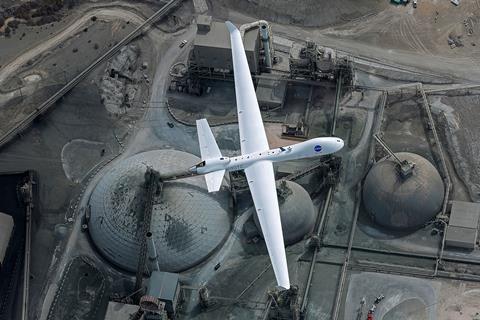 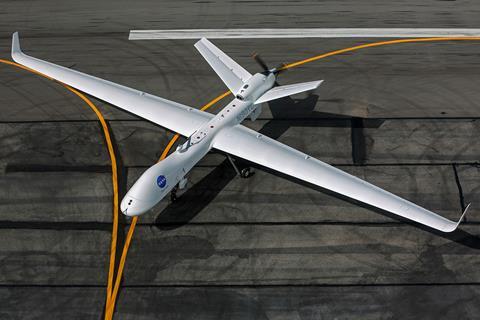 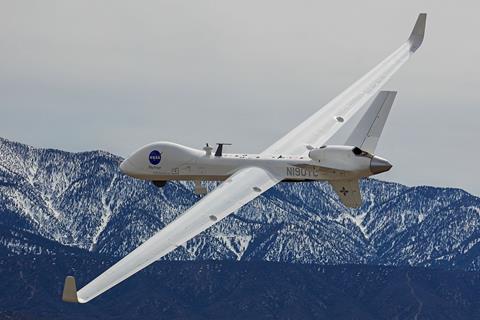 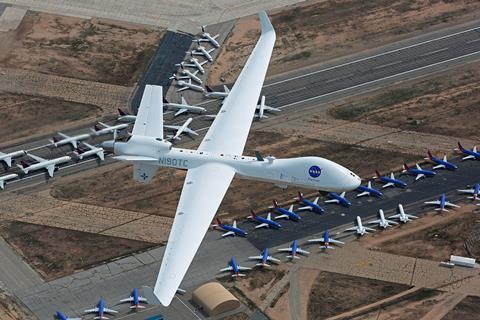 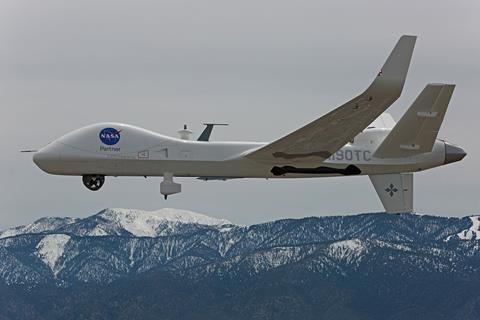 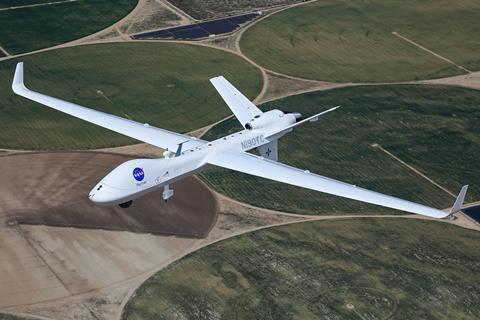 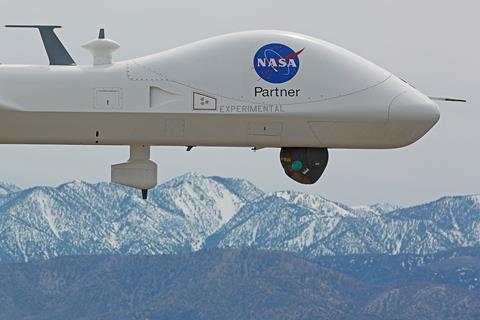 General Atomics Aeronautical Systems has flown its MQ-9B SkyGuardian unmanned air vehicle (UAV) in the USA’s national airspace as part of an experiment for NASA.

The company flew a special variant of the military aircraft on 3 April over Southern California as part of the NASA Systems Integration and Operationalization demonstration programme, it says on 6 April.

General Atomics says the UAV demonstration showed how on-board sensors could be used for “inspections of hundreds of miles of rail, power line, communication and canal infrastructure, agriculture monitoring and topological surveys, as well as wildfire and flood monitoring.”

The SkyGuardian took off from the company’s Gray Butte Flight Operations Facility near Palmdale, California and flew south through the national air space toward Yuma, Arizona, says General Atomics. The flight duration of the demonstration was not disclosed, though the military version of the aircraft has a 40h endurance.

The remote pilot operating the UAV was based in Gray Butte. That operator flew the MQ-9B with a General Atomics-developed detect-and-avoid system, which included a traffic alert and collision avoidance system. The company says it also used an air-to-air radar to spot nearby aircraft which were not using transponders.

General Atomics is moving to diversify its customer base away from the military by pushing into the civilian world of aircraft surveying services.

“Our work with NASA is opening the eyes of regulators to the safety and utility of unmanned aircraft systems in the performance of certain tasks for public and commercial good,” says Linden Blue, chief executive of General Atomics. “Our aircraft have already played important roles during crisis management events such as wildfire containment. Our airborne sensors can see through thick smoke, enabling us to inform ground personnel about the locations of fire lines so they can deploy resources efficiently. The demonstration highlighted how the aircraft can be used for many other civilian and commercial missions.”

Though the overall detect-and-avoid system on the experimental MQ-9B was developed and integrated by General Atomics, special components were supplied by third parties, the company says. For example, Honeywell supplied the traffic alert and collision avoidance system. Collins Aerospace supplied command and non-payload communications datalink radios.

As part of the NASA experiment, Bell’s Autonomous Pod Transport 70, a small vertical-take-off-and-landing UAV capable of carrying 32kg (70lb), will also be flown in the national airspace in 2020. Such a drone could be used for unmanned package deliveries.

Corrected: Article changed on 8 April to note that the MQ-9B is being developed for the UK Royal Air Force, which is the aircraft’s launch customer. The US Air Force has an earlier model of the UAV.