The German air force has touted the benefits that a high-altitude, long-endurance unmanned air vehicle would have over a converted business jet to fill the signal intelligence capability gap that it was left with in 2010.

It retired its Breguet Atlantics that carried out this role to pave the way for the introduction of the Northrop Grumman Global Hawk-derived Euro Hawk UAV, although this was subsequently cancelled because of the escalating costs that arose in order to integrate the aircraft into national airspace.

It is now interested in the MQ-4C Triton maritime variant of the Global Hawk – which overcomes a series of challenges that the European variant faced, such as de-icing, some sense-and-avoid capability and communication links to developing air traffic management systems – and is considering starting a programme to explore this capability versus that of a converted business jet for the SIGINT role.

A manned choice would allow the aircraft to fly in national airspace, so although the capability of it would not match that of the Triton, it would be more easily certificated.

“It will not be the same in terms of capability, but it will be able to fly where we want it to. We need to be able to use and train on it,” a German air force operational forces command representative told the Airborne ISR and C2 Battle Management conference in London. “I see no problem in integrating this capability into the airspace as long as we can obtain a certificate to fly.”

A decision is expected to be made by the Ministry of Defence and secretary of state on a possible competition by the end of 2015. 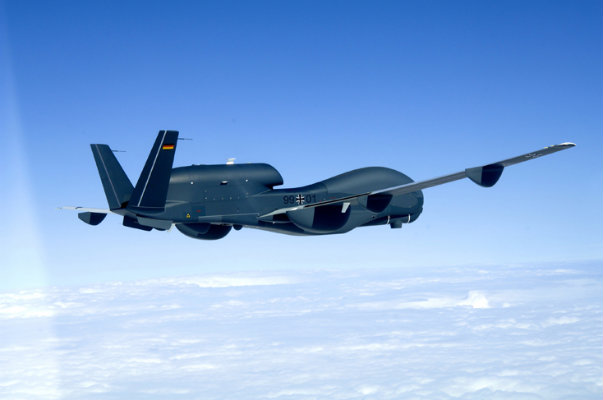 The Euro Hawk development began in 2000, and the air force representative claims that UAV technology has developed since then: “They are much safer than they used to be. It isn’t 2000 anymore.”

In parallel to this, the German government is also expecting to begin testing the Euro Hawk sensor again in a series of tests that are expected to start at the end of 2015, and will carry on from where the last lot of testing left off.

The flight testing of the aircraft was completed under the previous contract, but the Airbus Defence & Space payload did not reach completion. If it fully develops, this could in theory be transferred over to the SIGINT aircraft choice: “A migration onto the new platform would be explored at a later date,” the air force spokesperson says.

“The MQ-4C is an easier air fit, but we still need to develop the sensor. We are trying to reuse the aircraft that is sitting in Germany. The plan would be that by the end of this year, beginning of next, we’d start flight tests of it again.”