As the Royal Navy moves towards retiring its only unmanned air vehicle from service in 2017, industry has presented a number of upgrades to UK-operated systems to try and tempt the service into continuing operations with such technology.

Using the RN’s Unmanned Warrior exercise that began on 10 October, Boeing and Thales have pitched upgrades to the ScanEagle and Watchkeeper UAVs respectively, which they hope will result in some interest.

Boeing’s Insitu subsidiary has presented a dual sensor configuration of the ScanEagle for the exercise. This takes the RN's baseline UAV with an electro-optical/infrared (EO/IR) sensor and adds a visual detection and ranging (ViDAR) search capability to the payload.

Acknowledging that the RN’s feedback on the operation of ScanEagle from its ships claimed there was a lack of search function in the system, Insitu has presented the ViDAR payload in response, Faris Bashoo, maritime unmanned systems project manager at Boeing, tells FlightGlobal.

“What we are bringing is a solution to requirements that the navy issued about a year after it started operating [ScanEagle],” Bashoo says, noting that the search capability was a key missing requirement.

The ViDAR function carries out a wide area search of a body of water, identifies possible targets, and cues the EO/IR sensor to carry out further search of the area while it returns to wide area surveillance.

“We’re hoping that after Unmanned Warrior we can sit down with the navy and discuss this,” Bashoo says.

ScanEagle is operated by the navy on a contractor-owned, contractor-operated (COCO) basis, with the current contract expected to end in 2017.

During the exercise the US Navy has also been demonstrating the RQ-21A Blackjack UAV, which is a derivative of ScanEagle. 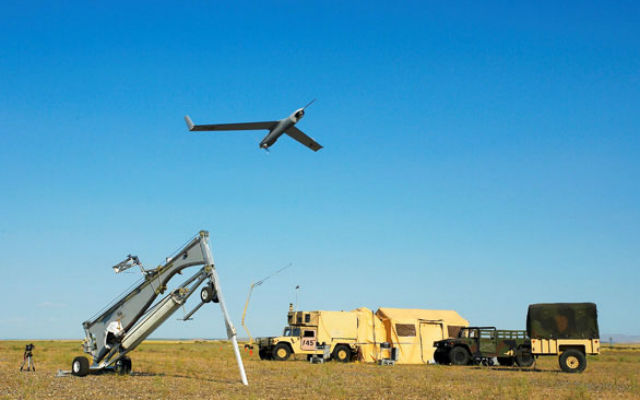 Regarding Camcopter, which Boeing is involved in alongside manufacturer Schiebel, Bashoo says that in 2015 the navy explored the rotary-wing UAV, and is considering running a six-month capability concept demonstration with the system.

“There are lots of expressions of interest, but finding funding is more difficult,” Bashoo notes. “We are hoping that after Unmanned Warrior there will be funding found.”

There is likely to be a capability gap between the end of the current COCO contract and acquiring another platform, and Bashoo says that another contracted system could be obtained to fill the void.

Meanwhile, the British Army’s WK450 Watchkeeper UAV has been demonstrated to the RN for the first time, including the inaugural use of a maritime radar capability. It carried Thales’s I-Master radar, and the company is using the exercise to demonstrate its ability to operate over both land and sea.

Ahead of Unmanned Warrior, Serco’s SD Northern River vessel travelled from Portsmouth to the west coast of Scotland where the exercise is now taking place, via west Wales, where Watchkeeper training is carried out.

While there, the launch of Watchkeeper was controlled from a land-based ground control station, with its sensors controlled from the SD Northern River, where the exercise’s Acer combat management system had been installed.

The ability of the UAV to hand over control from land to sea was a key aim, Nick Miller, Thales’s business director for unmanned systems, tells Flight Global, and demonstrates to the Ministry of Defence what it could potentially do with its future 54-strong fleet of Watchkeepers.