Boeing-owned Insitu unveiled an extended-range unmanned air vehicle, called the Integrator ER, which is intended for use by the US Air Force.

The medium-altitude UAV has an endurance of 10h on station after traveling 200nm (370km), or 6h on station at 300nm (556km), according to Esina Alic, Insitu president and CEO, who presented the aircraft at the Air Force Association’s Air, Space & Cyber Conference on 17 September in National Harbor, Maryland. The UAV can be controlled at greater distances using a jam-resistant satellite link, instead of a line-of-site radio link, which typically limit small UAVs to ranges of 50nm (93km) to 70nm (130km), she added.

The 65.7kg (145lb) aircraft is interoperable with Insitu’s other UAVs, the RQ-21A Blackjack and ScanEagle, the company says.

“It has interchangeable modules that can be changed in the field,” says Alic.

For example, electronic warfare, signal intelligence pods, as well as electro-optical and infrared camera pods, can be quickly swapped in and out of the aircraft. The system can be operated by a team of 12 operators, maintainers and mission commanders, says the company. 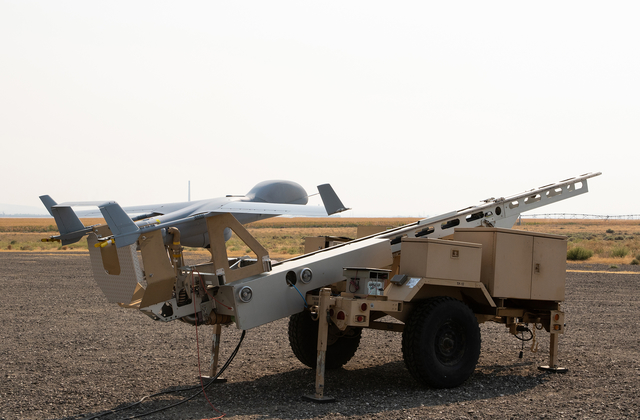 The Integrator ER is launched via a catapult and landed with a sky hook, allowing it to operate independent of a runway. It is acoustically and visually undetectable at tactical altitudes, says Alic.

The UAV’s satellite communications link allows it bandwidth throughput up to 10Mb per second with a less than 1.5 second latency.

Insitute has added weapons attachment points under both wings of the UAV and has a roadmap to integrate weapons on the aircraft, but declined to elaborate on its specific plans.

The aircraft will initially be offered as part of an intelligence, surveillance and reconnaissance service to the USAF, said Don Williamson, vice president and general manager of Insitu Defense.

“Full service contractor operations for the Integrator ER will cost approximately one-third of contracted medium altitude unmanned systems in operations today,” he says. “This new option allows the Department of Defense to either increase its current ISR capacity within current budgets or save money by augmenting higher cost systems with smaller unmanned systems.”

The Integrator ER is ITAR regulated, he added.