Leonardo has finally released details of its 26 May contract award from the US Navy to provide its Osprey 30 flat-panelled radar for the Northrop Grumman MQ-8C Fire Scout unmanned air vehicle.

Earlier this year, the navy announced that it had contracted the company to provide the sensor, but a protest from rival bidder Telephonics to the US government delayed any further details being released.

The protest has now been dismissed, and Leonardo confirms that an initial batch of five active electronically scanned array (AESA) radars has been ordered. These will be delivered to US Naval Air Systems Command in the first financial quarter of 2017.

This initial delivery will be used for integration, test and evaluation on-board the Bell Helicopter 407-derived MQ-8C, and the USN holds an option to buy a larger quantity for operational use.

“We are optimistic that future options will be exercised,” Brendan Nolan, vice-president of sales for radar and advanced targeting at Leonardo Airborne and Space Systems, tells FlightGlobal. “Leonardo has already built a number of Osprey radars, so our primary task under this contract is integration with the MQ-8C Fire Scout platform in time for first production deliveries.” 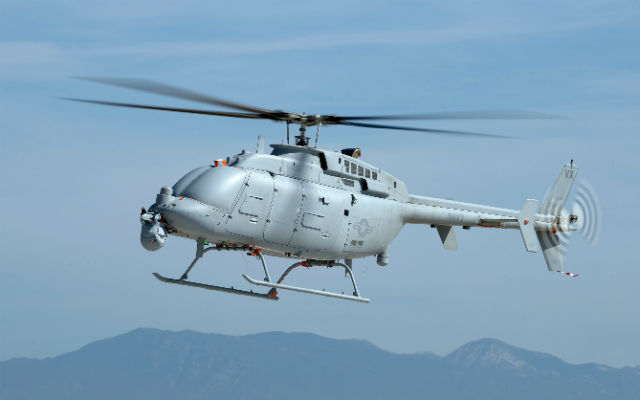 Nolan says the USN’s primary requirements for the contract were the Osprey's range and reliability, plus an option of different radar modes.

“Osprey met these criteria by providing a long-range, instantaneous field of view and a range of digital modes including weather detection, air-to-air targeting and a ground moving target indicator,” Nolan says. “We understand that the navy was also impressed by the very high mean time between failure rate offered by Osprey, due to its AESA-based construction.”

Nolan says frigate-based operations require a low rate of maintenance, and that Osprey is considered easy to maintain because of the lack of moving parts.

The USN has selected a two-panel version of the Osprey system, which will provide 240° of surveillance coverage, but has an option to upgrade this to a three-panel configuration offering a 360° capability.

Leonardo hopes that following this contract, any other potential customers for Fire Scout would consider the Osprey as its AESA radar selection.

“We are also hopeful that, should Fire Scout be selected for other US Navy vessels, Osprey will be seen as a critical part of the package,” Nolan says.

Telephonics, which provides its ZPY-4 radar for the USN’s Schweizer 333-derived MQ-8B version of Fire Scout, was the other main contender for the contract.