Air Mobility Command began a programme to modernize the C-5s in 1998 after a study concluded the decades-old aircraft had 80 percent of their service life remaining. Since, Lockheed Martin upgraded 52 C-5s for the USAF with new engines, avionics and diagnostics systems – upgrades which will extend the service life of the fleet out until the 2040s.

As part of the modernization programme, the C-5’s engines were upgraded from four General Electric TF-39 engines to General Electric F-138 engines. The new engines delivers a 22% increase in thrust, a 30% shorter take-off roll, a 58% faster climb rate, according to the USAF. 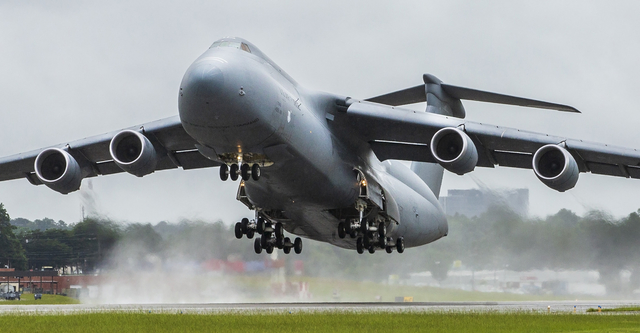 Lockheed Martin says the new engines are also ten times more reliable and quieter. And, the aircraft’s range was increased 900nm to 5,250nm over its predecessors.

The first C-5 was delivered in 1970, with 128 aircraft of the original A, B, and C variations delivered up until 1989, according to the USAF. Aircraft that weren’t scheduled to be upgraded were retired by September 2017.

The first operational C-5M was delivered to Dover Air Force Base, Delaware in 2009. The aircraft are manufactured at Lockheed Martin’s Marietta, Georgia facility.

Touted as the USAF’s largest transport, the aircraft’s nose and aft doors open, allowing ground crews to simultaneously load and off-load cargo from both ends, reducing cargo transfer times. Its wide berth and drive-on ramps enable double rows of Humvees to be carried.