In 2001, Lockheed Martin’s Skunk Works secretly flew a flying wing unmanned air vehicle (UAV) with a roughly 9m (30ft) wingspan with modular wings and a bulbous fuselage as a technology demonstrator for a family of aircraft.

As the company prepares to celebrate the Skunk Works’ 75th anniversary in June, Lockheed decided to reveal the existence of the formerly secret project at the Los Angeles County air show on 24 March in Lancaster, California, which lies few miles north on Highway 14 from the unit’s headquarters in Palmdale.

Lockheed’s “X-44A” greeted visitors at the entrance of the five-year-old local event near Edwards AFB, a storied flight test centre for the US Air Force and NASA.

Although the project’s existence is no longer a secret, Lockheed is not yet prepared to offer many details beyond the year of its first flight and its role as a demonstrator for a family of UAVs. 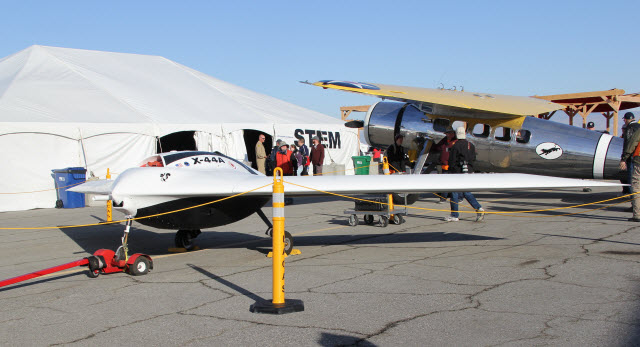 The project bears the hallmarks of many Skunk Works projects, including a name possibly intended to cause confusion. For two decades, the X-44A designation was thought to be assigned only to a NASA proposal for an X-plane. NASA’s late-1990s proposal, never consummated, called for testing a Lockheed F-22 with a trapezoidal wing and no vertical tails.

Why the X-44A designation was secretly reassigned to the Skunk Works UAV project is not clear. Lockheed’s confirmation and unveiling came nearly two months after Tyler Rogoway, a journalist for the The War Zone blog, first reported the X-44A’s alternative identity as a flying wing demonstrator.

Based on the designation and timing of first flight, Lockheed’s X-44A appears to pre-date the launch of a series of rival X-plane demonstrators, including Boeing’s X-45A that flew in 2002 and Northrop Grumman’s X-47A. 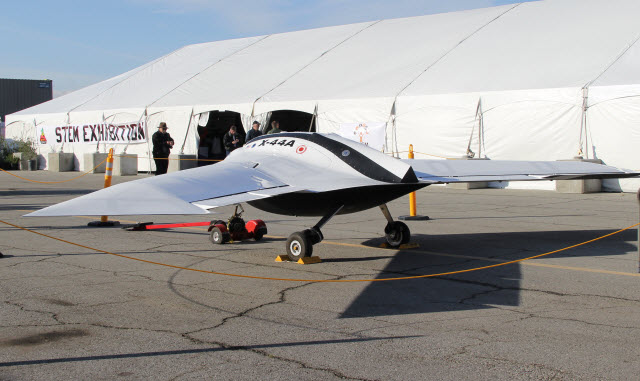 The X-44A also fills a gap in the Skunk Works’ long association with UAVs, which originated in the late-1950s with a proposal for the stealthy, subsonic surveillance aircraft called the Gusto II. A decade later, Lockheed fielded the unmanned D-21, a Mach 3 drone. It was originally designed to be launched from a modified version of the A-12, the variant of the Blackbird family acquired by the Central Intelligence Agency. After a flight test mishap, Lockheed re-assigned the D-21 to launch from the Boeing B-52.

Two decades later, a consortium of agencies, including the CIA, USAF and National Reconnaissance Office, commissioned the Skunk Works and Boeing to develop competing proposals for the Advanced Airborne Reconnaissance System (AARS), a high-altitude UAV with loitering capability, according to author and USAF official Tom Ehrhard, who in 2010 published “Air Force UAVs: The Secret History”.

Lockheed’s design for the AARS aircraft was likened to a “flying clam”, with a saucer-like blended fuselage and long, high-aspect ratio wings, wrote Ehrhard. But the project ended as a budgetary fiasco in 1992, as the cost of the aircraft rose to over $500 million. 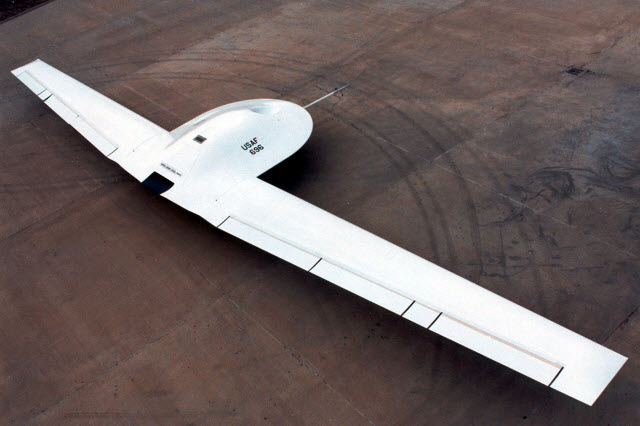 National Museum of the US Air Force

Until the confirmation of the existence of the X-44A, nothing was known about Lockheed’s UAV development activity between the cancellation of the RQ-3 and the first flight of the Polecat UAV demonstrator in 2005. Four years later, the USAF also confirmed the existence of Lockheed’s RQ-170 Sentinel, a medium-altitude surveillance aircraft that became operational at least two years earlier.

As a seemingly modular flying wing with a bulbous body, the X-44A appears to belong to the same family of UAV designs as the Polecat and the RQ-170 from the mid-2000s, rather than the AARS and RQ-3 from the 1980s and 1990s.