General Atomics Aeronautical Systems has introduced a new sonobuoy capability for its MQ-9 Guardian maritime unmanned air vehicle which, alongside a number of other developing technologies, could make it a contender to help fill the UK’s maritime patrol gap.

A concept was presented at the Royal Navy’s maritime awareness conference at RNAS Culdrose in Cornwall on 24 September, which showed a number of sonobuoys being released from a bay on the UAV.

While a requirement for a maritime patrol aircraft (MPA) acquisition has yet to be released from the UK government, the developments that General Atomics is incorporating into the MQ-9 suggests that it will look to offer a modified Guardian to complement a manned MPA that is expected to be procured.

“What we’re really looking at is a Predator B carrying sonobuoys, controlling them, and sending sonobuoy information back to the ground station over a SATCOM link,” King says.

“The work has seen us put the system together in a lab and carry out ground testing and prove it end to end. We were ready to go flying in 2015, but the aircraft were diverted to more urgent work. So we will be flying this early in the new year to prove the system.” 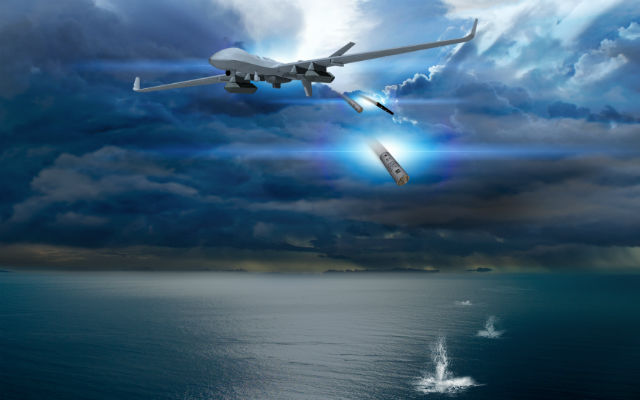 MQ-9 with the sonobuoy concept

The first demonstration will see the aircraft fly over sonobuoy emulators that are placed on land, and then send data back over the SATCOM link to an acoustic receiver on the ground.

“It won’t be the final system, but is the first step,” King says.

In 2012 the company worked with Selex to integrate the Seaspray 7500E multimode active electronically scanned array radar onto the MQ-9. Maritime AIS and identification friend or foe transponders can also be integrated to add to the capability.

“The Reaper could be re-roled at any stage for the maritime mission, it takes about 12h to put the maritime pod on,” King adds.

Other technology developments that the company is advancing include extended-range wings with external fuel tanks – something that has just been fielded with the US Air Force for the first time. These can be retrofitted onto the MQ-9, and the sonobuoy-integrated concept was shown with the extended-range wings and winglets.

Meanwhile, the company is developing a certifiable variant of the MQ-9 that will be able to fly in national airspace. This includes integration of the company’s detect and avoid Due Regard Radar system – for which it has been working with NASA and the US Federal Aviation Administration – into a modified MQ-9 nose, plus de-icing, lightning protection and a composite make-up similar to that on a Boeing 787.

A prototype of the detect and avoid system has just completed the third round of testing with NASA’s MQ-9-based Ikhana UAV, and testing using a certifiable system is expected to take place next year and be ready for certification in 2017. 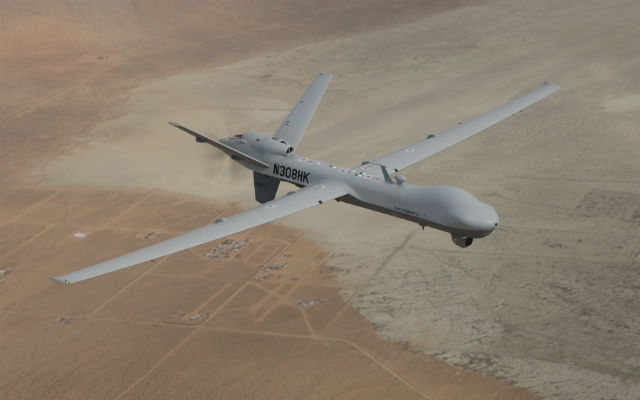 MQ-9 with the modified nose for the Due Regard Radar

More details on the UK’s Scavenger requirement, which is expected to source a new, armed surveillance UAV from 2018, are expected to be released early next year, and King notes that the certifiable variant of the MQ-9 will be ready in time for that schedule.

King notes that there is UK technology that can be integrated onto the MQ-9, including the already-proven Selex radar and MBDA's dual-mode Brimstone air-to-surface missile, which could be a future option.

“We’re now working towards a certifiable system and it will be able to complement other maritime assets,” King notes.