Northrop Grumman displayed a model of the MQ-8C Fire Scout at the Royal International Air Tattoo fitted with an Ultra Electronics sonobuoy mission pod, a little over a week after the unmanned helicopter completed initial operational test and evaluation on board the USS Coronado.

Northrop would not comment on the pairing, but the introduction of the pod appears to indicate that the helicopter's mission has been expanded to anti-submarine warfare. UK-based Ultra Electronics' pods carry between 25 to 63 sonobuoys of the G-Size and F-Size configurations. 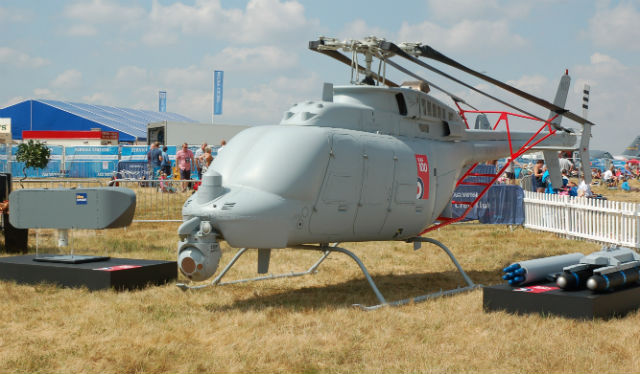 Thus far, the MQ-8C Fire Scout unmanned air vehicle, with its ability to hover at an operating ceiling of 16,000ft and fly 12h missions, has been pitched as a high watch tower for littoral combat ships.

The Fire Scout is a Bell 407 commercial helicopter that is stripped down, stuffed with extra fuel tanks, equipped with a phalanx of sensors. The aircraft is larger and has double the endurance of its predecessor, the MQ-8B, which is a converted Schweizer 330 commercial helicopter.

The company says the Fire Scout's surveillance capabilities will be further enhanced by the addition of the Leonardo Osprey radar. That sensor is planned for initial fielding in late 2020.

"It’s going to give that helicopter an amazing ability to detect a large area and a huge number of contacts for littoral ships," says Thomas.

Northrop says it also plans to conduct a Link 16 demonstration with the unmanned helicopter by the end of this year.

The US Navy has 19 MQ-8C Fire Scouts, and Grumman is on contract for an additional 14.