Northrop Grumman will demonstrate that an MQ-9 Reaper-sized unmanned air vehicle (UAV) can operate at sea from ships smaller than an aircraft carrier under a $93 million contract awarded on 24 December.

The terms of the contract require Northrop to contribute $39 million, raising the overall cost of the demonstration programme to $132 million. 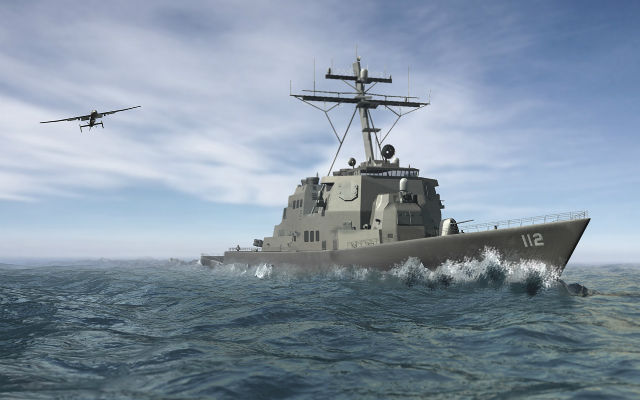 On 11 December, Northrop revealed a model of the company’s secretive design to a handful of journalists touring the company’s El Segundo, California, research and manufacturing facilities. The model showed Northrop had selected a flying-wing tailsitter design with a nose-mounted counter-rotating propeller system.

The 12.2m (40ft)-span vehicle appeared reminiscent of the tail-sitting Lockheed XFV-1 and Convair XFY-1 Pogo fighters research projects of the 1950s. But Northrop’s TERN differed in design with the absence of a fuselage and a much larger set of counter-rotating propellers that measured as much as one-third of the wingspan.

The model also showed that Northrop envisioned mounting weapons and other stores externally on hard points under the wing.

DARPA launched the TERN programme to solve a capability problem for the US Navy. The service regularly operates small, tactical unmanned air systems, such as the Boeing/Insitu Integrator from frigate-class ships, using a catapult to launch the aircraft and a crane to recover it. But carrying payloads larger than about 30kg required using an unmanned helicopter, such as the Northrop MQ-8C Fire Scout, which can carry heavier loads but lacks the range and endurance of a General Atomics Aeronautics Systems MQ-9.

The TERN attempts to bridge that gap with a vehicle that can carry a 272kg payload on missions up to 900nm (1,670km).

The Phase III contract awarded to Northrop on 24 December requires the company to build a demonstrator, perform ground testing and demonstrate the aircraft at sea.