The Italian air force’s future unmanned air vehicle has been touted in its true colours at the show, with the 28º Gruppo UAV sqn markings – a witch on a broom – appearing on the side of the Piaggio Aerospace P.1HH HammerHead.

In February it was announced that the Italian air force would be the launch customer for the HammerHead, as it committed to purchasing three systems - consisting of six air vehicles and three ground control stations - to be delivered in 2016 to the 28º Gruppo element of the 32° Wing located in Amendola AFB Italy. 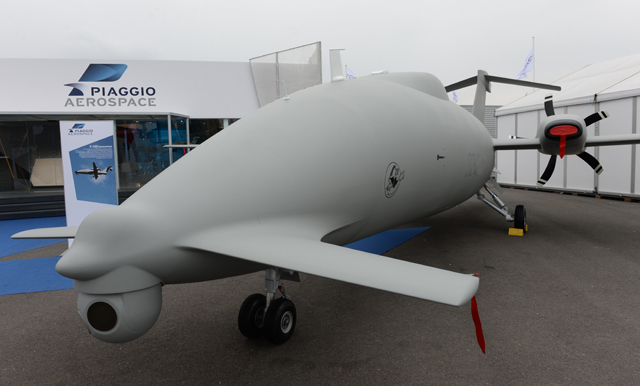 Chief of the Italian air force, Gen Pasquale Preziosa, paid it a visit on Tuesday during the show, amid reports that the company is hoping to be the first to fly a UAV of this size at an air show – namely Farnborough next July.

The medium-altitude, long-endurance UAV is derived from the manned P.180 Avanti twin turboprop. It was developed in collaboration with Selex ES, which will provide the mission control system, sensors, data link and ground control station.