In an effort to further test the integration of unmanned air vehicles (UAVs) in European airspace, European Commission testing saw the SAGEM Patroller carry out flight trials in homeland security scenarios in Portugal.

Through the Commission’s airborne information for emergency situation awareness and monitoring – or Airbeam – project, the Patroller operated in civil airspace from the Beja air base in Portugal from 5-8 October, using homeland security scenarios as defined by the Portuguese national guard and air force.

The aim of the project is to develop a management system for large-scale crises using UAVs, balloons and satellites, and these operational demonstrations serve to validate that system.

“The Patroller played a full role in all of these events, which provided full-scale simulations of homeland security missions,” SAGEM says. This included the surveillance of high-value sites as well as missions entailing population risk management.

“In fact, the drone’s capabilities turned out to have a very practical, and unexpected purpose, since during one of its flights the Patroller detected a fire in the country at a range of more than 20km,” SAGEM added. “The information on this situation that it transmitted in real time helped coordinate the response teams.” 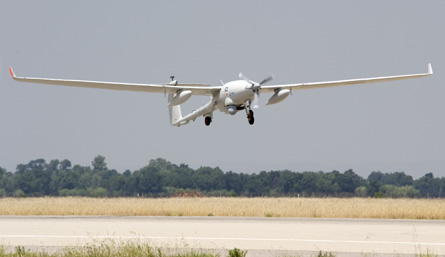 In early November 2014, Patroller completed another airspace integration demonstration during an 11-day flight-test campaign under the Operational Demonstration of RPAS in European Airspace (ODREA) project.

During this, 20 test flights were carried near Toulouse, France, in which a sense-and-avoid system developed by SAGEM and integrated on to the Patroller was utilised to test its collision-avoidance capability.

SAGEM teamed with the French air navigation and safety agency DSNA, the laboratory of the national civil aviation school and Rockwell Collins France to carry out the ODREA research under the Single European Sky ATM Research initiative, which is looking to introduce UAVs into European ATM systems.

Patroller is also one of two remaining systems, alongside the Thales Watchkeeper, that is competing for France’s tactical UAV requirement. A decision is expected soon.