The Uber Elevate ecosystem is designed to make it as easy as possible for companies to manufacture and certify electric vertical takeoff and landing aircraft. With that in mind Honeywell and Safran, two companies in that partnership, are striking deals with airframers to mass produce parts for eVTOL concepts with the aim of lowering manufacturing costs and easing their path to certification for passenger flights.

Safran on 11 June unveiled a cabin concept for eVTOL aircraft that carries four passengers and a pilot, which it designed with Uber beginning in September. The Uber vision is to "accelerate" the development of these aircraft so its ridesharing app users could reserve flights between fixed locations called skyports as early as 2023, pending regulatory approval. Uber is not building anything, so it shared its urban air mobility research with Safran. Honeywell is offering a selection of products for eVTOLs including avionics, navigation, fly-by-wire systems, electric propulsion and flight controls. 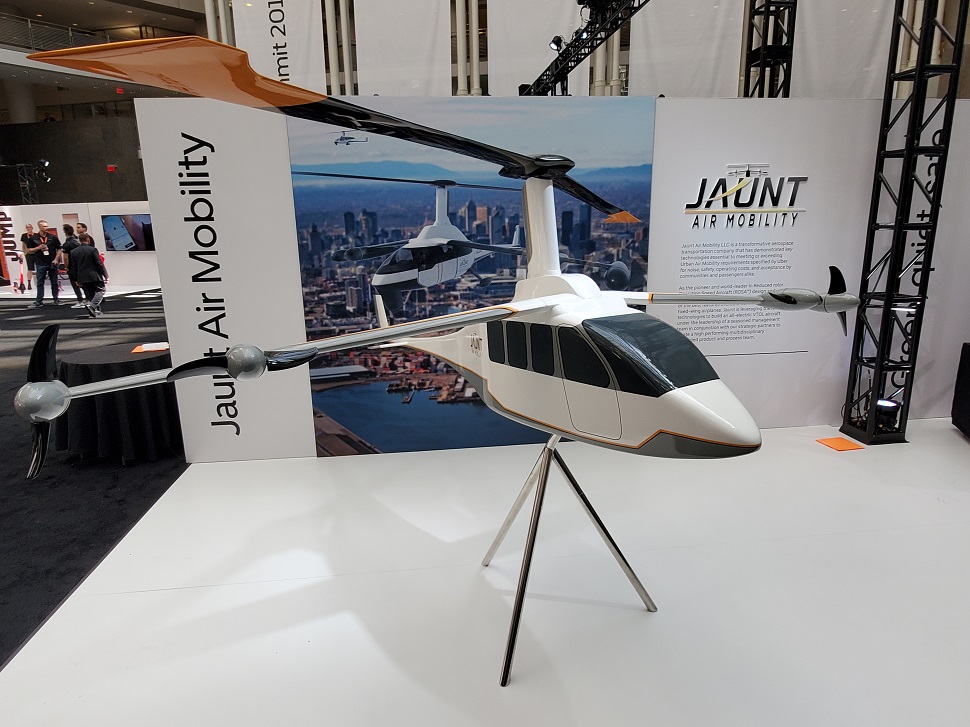 Jaunt Air Mobility will incorporate products from Safran and Honeywell in its unnamed eVTOL aircraft, both of which are taking "an aircraft agnostic approach" in supplying parts for the nascent urban air mobility industry, says Kaydon Stanzione, chief executive of New Jersey-based Jaunt.

Each aircraft will have its own unique needs for flight controls, for instance, but Honeywell and Safran are "trying to figure out what's common across all aircraft configurations and build to the commonality", Stanzione says.

"The unique pieces that make us different from everybody else are something that Honeywell and Jaunt work together to resolve," he says. "Together we’ll develop the quietest vehicle with the highest levels of safety compared with other aircraft in its class.” 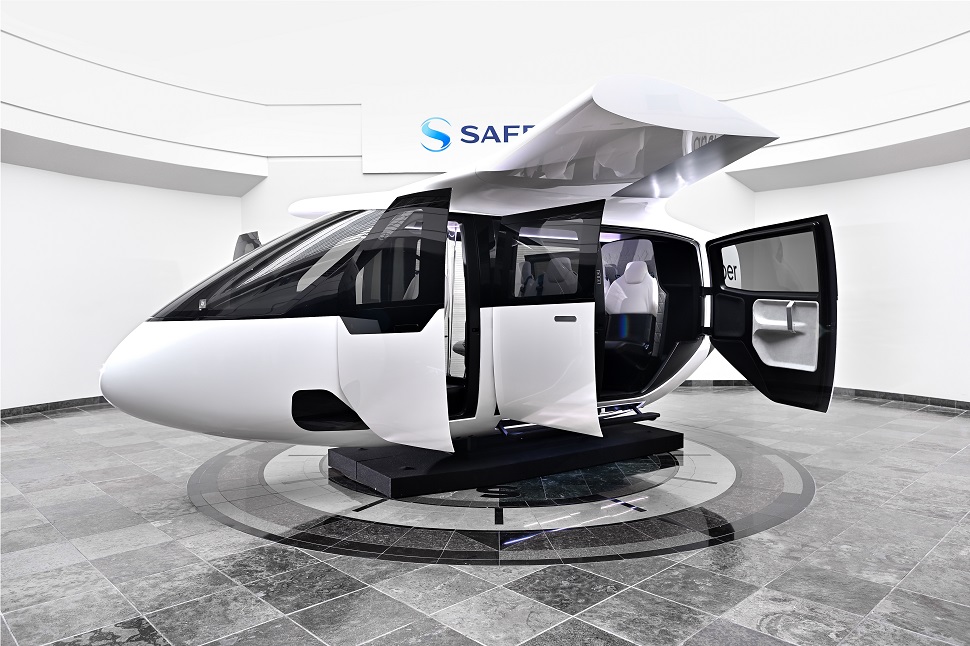 The Jaunt aircraft will also include the "bespoke cabin" designed by Safran Cabin in partnership with Uber, says John Badalamenti, head of design for Uber Elevate. Based on the average distance of 20 to 60 miles (32 to 96km) that Uber expects a sky taxi aircraft would travel each trip "four people at a time is really the sweet spot" says Badalamenti of the cabin size.

"The more successful all of our partners are on staying completely focused on their contribution, the better," Badalamenti says of Safran and Honeywell leveraging their respective resources for aircraft manufacturers.

Weight and size were considerations for the cabin because "the smaller these aircraft are the better their performance will be and the more densely populated we can get our skyports," Badalamenti says.

Even companies that do not add the design directly can study it to inform their planning, he says, noting that Uber has also created "a common reference model" for an eVTOL aircraft that includes several common design aspects Uber recommends including a pilot chair and battery propulsion. The goal for Uber and others in the nascent eVTOL market is to make these aircraft autonomous but starting with a pilot for the first generation of the aircraft will make it easier to convince the public and regulators of their safety.

The Safran cabin is also designed for aircraft that will be propelled only by batteries and would have to be adapted for designs that would include both battery propulsion and a gas turbine. So far the Bell-built Nexus with six ducted tilt-rotor fans is the only hybrid aircraft in the Uber Elevate ecosystem. 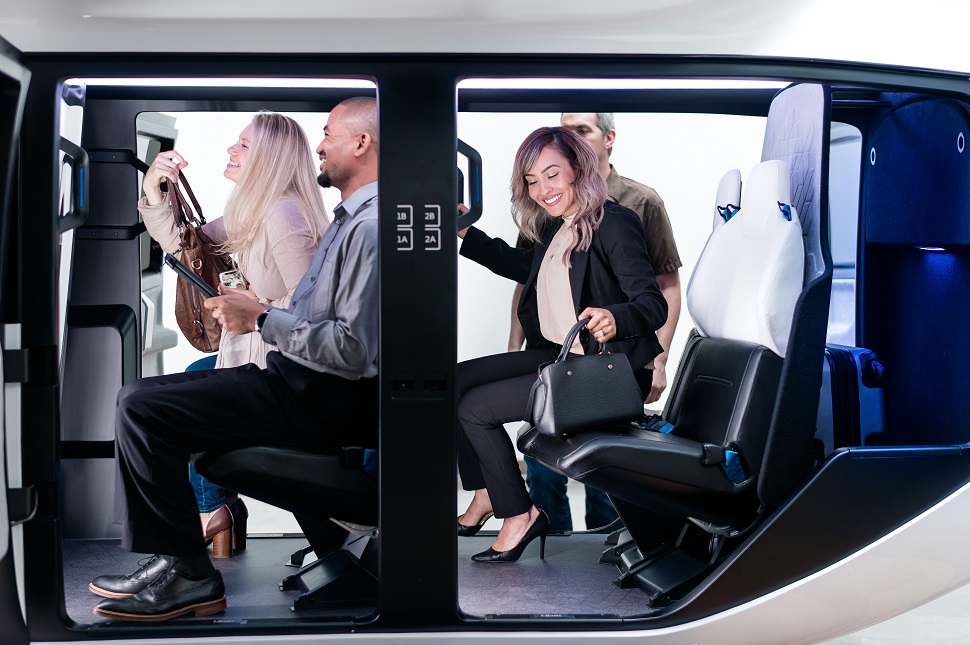 The cabin is designed "first and foremost for the safety of the passenger" while aiming for comfort with foot space, broad windows for panoramic views and space behind the back seats for small bags, says Scott Savian, executive-vice-president of design at Safran Cabin.

The seats are "basically ready for certification" since they resemble seats already certified for helicopters, Savian says. Seat harnesses and a fire extinguisher under the pilot seat are also safety features included with certification in mind. Components in the cabin have "a major emphasis on lightweight" while also considering fire risks and protection for the passenger, he says.

"We believe that collaboration between the automotive and aerospace industries is crucial to achieve high-quality and mass-scale urban air mobility,” says Kenichiro Ito, chief executive officer of DENSO North America.

Start-ups developing eVTOL aircraft may not have the engineering expertise or resources to mature or certify technology on their own, so by developing parts Honeywell aims to offer clients lower costs, ease of mass manufacture and greater chance of reliability.

Bryan Wood, senior director of Honeywell's hybrid-electric and electric propulsion programmes says "there are quite a few equipment manufacturers we have been talking with" that are interested in shaping their eVTOL designs to include Honeywell parts,

"It will have to come down to the balance of can you perhaps shape your vehicle around our design as opposed to us building a different motor for every single vehicle," Wood says.

Aircraft maker Pipistrel is also working with Honeywell for an "entirely unique" cockpit. The eVTOL built by Pipistrel will also include Honeywell avionics, flight controls and navigation in its eVTOL, or "the brain" of the vehicle, says Tine Tomazic, chief executive of the Slovenia-based electric aircraft manufacturer. Being one of the first customers of eVTOL parts from Honeywell means that many of those parts "are completely customised" for Pipistrel's vehicle, Tomazic says.

"The fly-by-wire system they have tailored to this, which they will obviously be able to offer to others," he says. "They have shown so much flexibility that we almost find it incredible from a company of that size."

Pipistrel already has several flight demonstrators of its eVTOL, either a quarter or half the size of the final product. It plans to test fly a full-scale demonstrator in 2020 in Slovenia, Tomazic says. 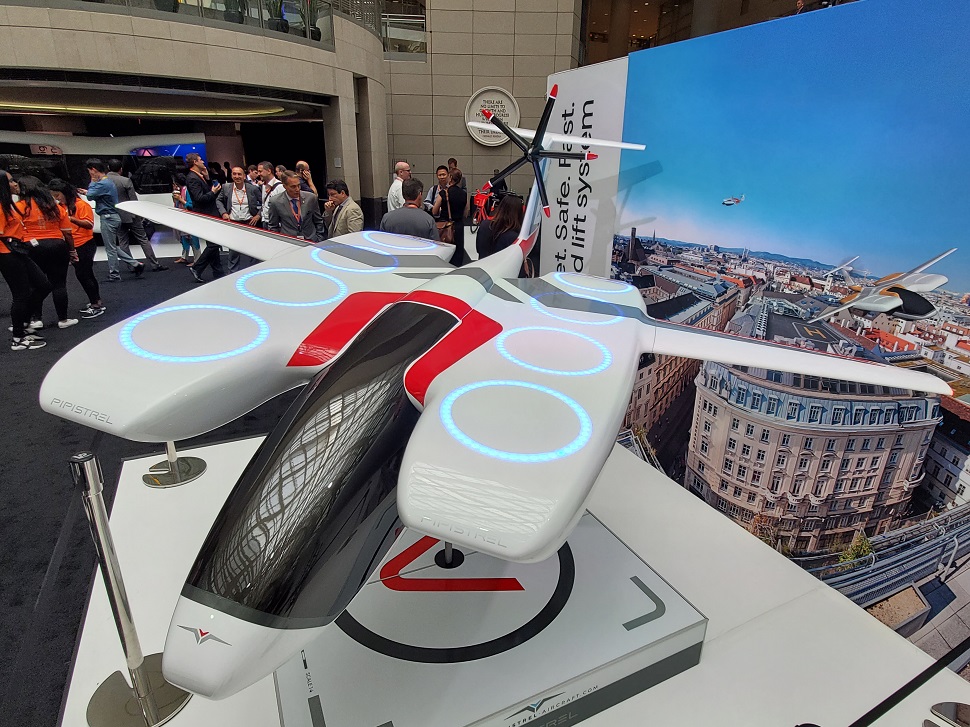