Plextek has repurposed a border control Doppler radar to track unmanned air vehicles (UAV) for use when GPS and radio signals are lost mid-flight.

Speaking at the UAS conference in Twickenham on 10 September, Paul Martin, chief technology officer at Plextek Consulting, says the firm tested its Blighter Surveillance Systems Blighter radar – used at Heathrow airport in the UK and in South Korea to monitor the northern border – with the Blue Bear Blackstart fixed-wing UAV, tracking the path of its flight from some 0.8nm (1.5km) away.

Martin says a radar could be used to help overcome issues with small UAV detection, airspace deconfliction and to track the aircraft. “With this [system] I can do all of the three elements that I was looking for,” he notes. “We can also track another aircraft that comes into the track of the radar.”

Radar tracking is used to monitor military UAVs, but this is not commonplace for commercial systems, Martin says. With the rise these systems for non-military applications, adding another tracking channel would make operation of the systems safer and more robust, and enable further operational use. 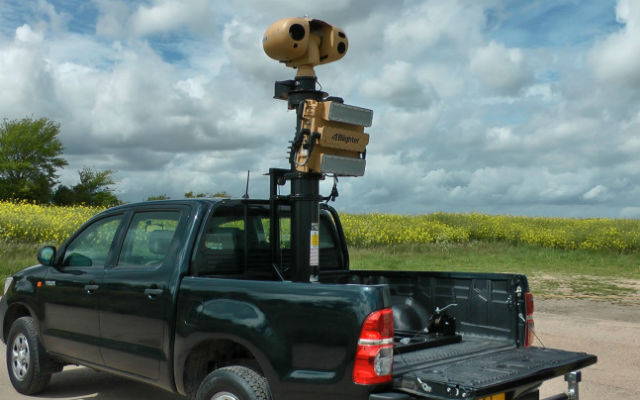 During the Blackstart testing, the UAV was flown above a purpose-built track in Bedfordshire, UK, while the portable 20kg (44lb) radar was mounted on a Land Rover to track the flight. This test took place 18 months ago, but Martin says other undisclosed trials have been carried out, and that a sale has been made.

The company proposes integrating the radar feed into a UAV’s ground control station, so should the GPS or radio feed be lost, the aircraft can still be tracked via the radar signal.

“You can never say that radio links are 100% reliable,” Martin says. “This is caused by both human error and for malicious reasons.”

Because it is a Doppler radar, Blighter has the ability to distinguish between fixed- and rotary-wing aircraft, as well as birds, based on the radar’s ability to pick up motion from the object it is surveying, Martin adds.