Raytheon is touting the use of its Phalanx air defence system alongside a laser to counter unmanned air vehicles that pose a threat to navy vessels.

The company is providing its system under a Babcock-led effort under the UK government’s Defence Science and Technology Laboratory’s laser directed energy weapon capability demonstrator (LDEW-CD) programme, which is exploring using a laser alongside a 20mm Gatling gun to counter airborne threats including UAVs.

Raytheon is now looking at adapting this technology to provide a counter-UAV system: a concept that is gaining popularity resulting from the proliferation of unmanned systems and the threat that they pose to people and infrastructure.

Babcock’s LDEW-CD offering includes the Phalanx surface weapon system, a Qinetiq laser, Leonardo optronics and a forward-looking infrared (FLIR) and radar system. A downselect is “imminent”, with other offerings expected to come from MBDA, Thales, Lockheed Martin and Rheinmetall, who will provide the Royal Navy with information on the potential of using lasers within weapon systems.

“There is nothing to stop militaries using Phalanx for this,” Andy Rhodes, business development lead for missile systems at Raytheon, told Flightglobal at a media event at the company’s Glenrothes facility in Scotland on 25 May. “It has previously been used to shoot down mortars during land operations, so can bring down UAVs as well.”

Rhodes adds that Babcock has trialled the FLIR sensor to detect slow moving targets such as UAVs, so the system has already been proven against the threat. 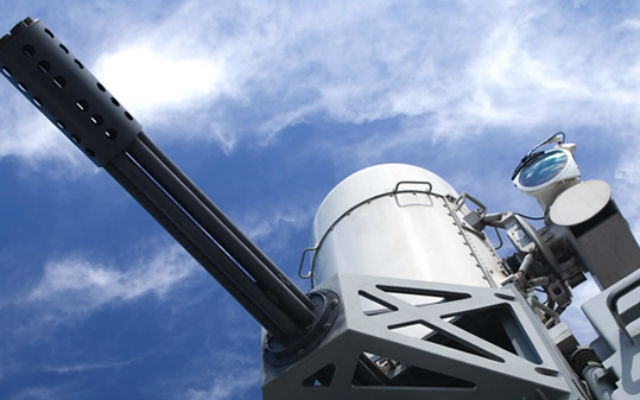 Should the technology be rolled out into an anti-UAV system, it would be one of the most extreme versions of a counter-UAV system, which typically bring down a malicious unmanned system by jamming the communications link.

The legacy gun is still required due to a laser’s weather limitations, but the focus is currently on the laser development because it is the discriminating technology for the system, Rhodes says.