The US Army is pursuing component changes to boost the reliability of the General Atomics Aeronautical Systems MQ-1C Gray Eagle’s heavy fuel engine, the service’s product manager for the medium-altitude, long-endurance platform says.

Speaking at the AUVSI Xponential convention in New Orleans, Louisiana on 3 May, Lt Col Jay Sawyer said the 160hp diesel engine that powers the service’s 130 baseline Gray Eagles “is performing as required on most levels” but it is “our number one risk area” in terms of aircraft reliability.

“It’s our number one focus area in terms of building back reliability into the system,” he says. “It meets our performance requirements and it’s in line with the capabilities document provided to us several years ago and meets our specifications, but when you look at the reliability and sustainment costs related to the subcomponents – whether it’s connectors, alternators or whatever – that’s where we have our most areas of concern. There’s a huge opportunity there at the platform level.” 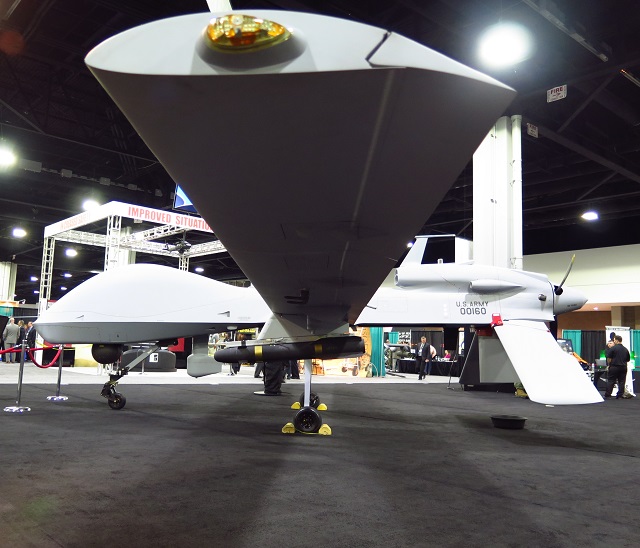 Sawyer says there is not a formal component improvement programme in the latest five-year budget blueprint, but some science and technology money is being used to mature some improvements.

The engines are manufactured in-house by General Atomics, which procured the data rights after the original manufacturer was purchased by China’s AVIC International.

A higher-performance version powers the company’s Improved Gray Eagle product, which the army has committed to procuring going forward. That model has greater endurance and payload capacity than the baseline version, with the maximum gross takeoff weight bumping up from 1.6t (3,600lb) to 1.9t.

Sawyer confirmed after the forum that there are no plans to initiate a re-engining programme, and instead there will be a series of component improvements as funding becomes available.

“We do not have the resources aligned to support any additional capability or reliability improvements in the out years yet,” he says.

Sawyer also encouraged industry to bring forward new technologies that could be integrated on the Gray Eagle platform, saying that there are lots of opportunities, particularly for new weapon integration efforts.