Naval officers aboard the USS Abraham Lincoln demonstrated for the first time the ability to remotely take control of an aircraft and land it on an aircraft carrier’s deck.

The ATARI technology was developed at NAS Patuxent River, Maryland by Naval Air Systems Command. It was initially tested on a Learjet in 2016, performing shore-based low approaches. An undisclosed number of F/A-18s were fitted with the technology in 2017. The system was deemed ready for trials at sea by the "Salty Dogs" of Air test and Evaluation Squadron 23.

"There was some nervousness because the sea state was so bad," said Lt John Marino, a carrier suitability pilot from the "Salty Dogs" and the first pilot to land on a flight deck using ATARI. "Back on the airfield, testing was benign." 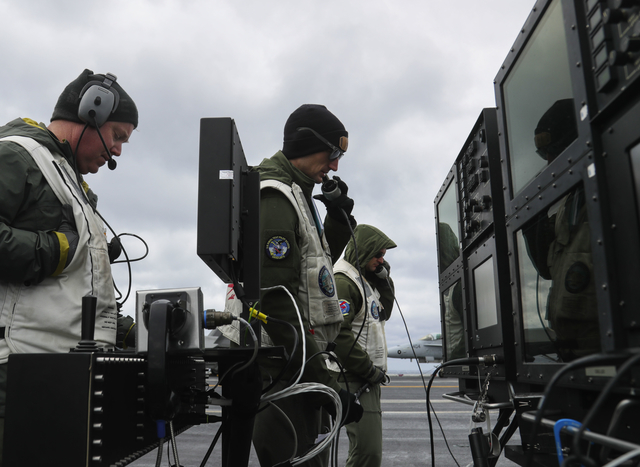 Image courtesy of US Navy

The system demonstrated a potential method for recovering an unmanned aerial vehicle by using the landing signal officer’s ability to observe and fix glideslope and lineup errors, said the US Navy. It is not intended to be a primary method for recovering manned aircraft, but provides a relatively inexpensive backup system.

During testing, the ATARI system operators controlled an F/A-18 aircraft using a joystick, while a safety pilot sat in the cockpit as backup. The technology is capable of taking over an aircraft from up to five miles away.

Testing was conducted over the course of two days in conjunction with carrier qualifications. ATARI is not scheduled for fleet-wide implementation as the system’s engineers plan to analyze the data collected aboard Abraham Lincoln and make adjustments for further at-sea testing.