US Navy sharpens algorithm for missile and drone swarm attacks

The US Naval Air Warfare Center Weapons Center (NAWC WD) enhanced a prototype algorithm, which could coordinate missile and drone swarm attacks, to the point where it can now can ensure several vehicles arrive from different directions on a single target within 250 milliseconds of each other.

By converging on a single target from all sides, a swarm of missiles or loitering munitions could overwhelm an adversary and ensure that an objective is destroyed.

The so-called multi-agent trajectory planner was funded by the Office of Naval Research and NAWC WD.

“It’s really a one-of-a kind algorithm,” said Joan Johnson, executive director of NAWC WD at the Navy League Sea-Air-Space conference in National Harbor on 8 May. The algorithm is designed to direct unmanned air vehicles on a realistic flight path, she says.

“We see a lot of trajectory planners that can do obstacle avoidance and other types of things, but they haven’t taken into account the actual aero-characteristics of agents that have to fly. Getting some small thing to do a 9g turn with your algorithm is not realistic,” says Johnson. “They built in all of the aero-characteristics of the agents [into this algorithm]. You can optimise these trajectories for coordinated time of arrival. You can optimise for minimum time or minimum fuel.”

The algorithm should have broad applications, she says.

“You can consider it for weapons and drones or anything where you’ve got homogeneous or heterogeneous combinations of systems,” Johnson says. “We are looking ahead to things like autonomy and how we can leverage the algorithm for things like that. What we are trying to do is build something that is agnostic to how you want to apply it.”

NAWC WD’s trajectory planner algorithm dovetails with autonomy swarm work that is being done by the US Naval Research Laboratory (NRL). The lab is experimenting with flight control software programs that autonomously coordinate swarms of small unmanned blimps. 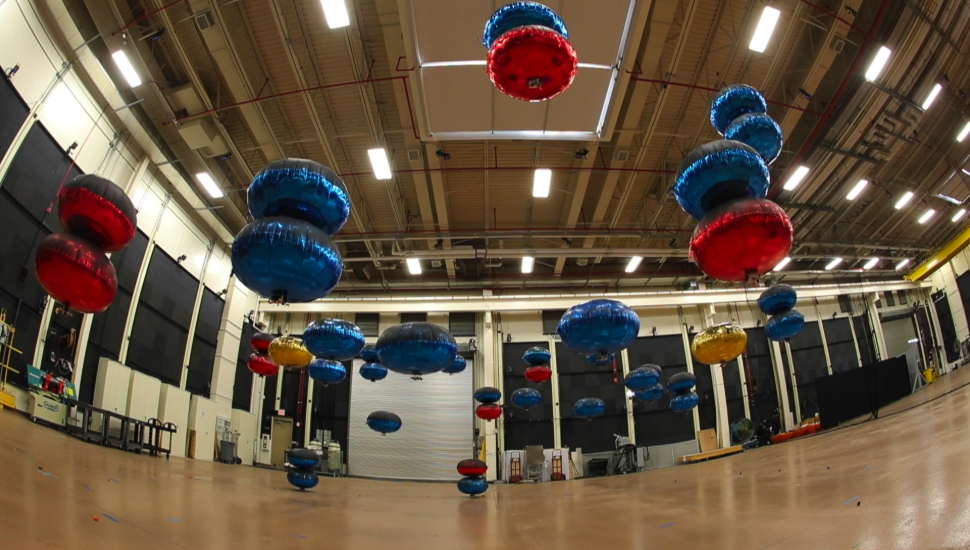 The NRL’s work is inspired by the swarm behaviour of animals. Possible applications include using swarms for intelligence, surveillance and reconnaissance, search and rescue, and perimeter defence, says Don Sofge, computer scientist and roboticist with the lab.

“We’ll have a behavior where the agents will respond to one another, such that they stay fairly close, but they avoid colliding with one another,” he says. “They’ll respond to an intruder by surrounding the intruder. This behaviour allows us to use them to protect assets.”

To improve the UAV’s functionality, the lab is looking at adding ultrasonic range, camera and acoustic sensors, as well as inertial measurement units.

Autonomy offers advantages to a swarm, especially in a war zone where UAVs could be lost to enemy fire.

“The nice thing is you can have a variable number of agents. And if you lose some of them the overall behavior of the swarm stays the same,” says Sofge. “Or, if you double the number, the behaviour stays the same.”