A European Commission-funded study has successfully demonstrated the ability of a tethered unmanned air vehicle to land on a moving platform without the aid of GPS.

Under the EC-Safemobil effort led by the Andalusian Foundation for Aerospace Development's Centre for Advanced Aerospace Technologies (FADA-CATEC) and the University of Seville in Spain, an unmanned helicopter was attached via rope to a moving platform and demonstrated its ability to land on it in a range of conditions.

The position estimation and motion control technology being evaluated allowed the electric-powered rotorcraft to land from high altitudes and in simulated high winds, showing how UAVs can accurately touch down on vessels without the aid of satellite positioning systems.

This, says the study, shows how unmanned systems could be used in disaster recovery or search and rescue operations where it is unsafe to deploy manned aircraft. 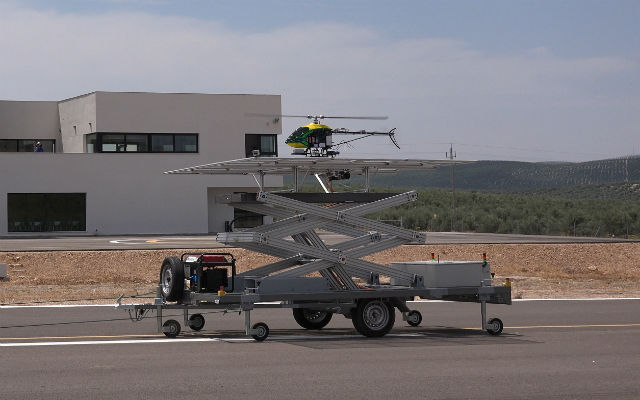 The tests took place in June at the Air Traffic Laboratory for Advanced Unmanned Systems (Atlas) experimental flight centre in Villacarrillo, Spain, which was specifically designed for the testing of light UAVs.

Other areas covered by the EC-Safemobil project include launching a UAV from a manned aircraft, and the tracking of multiple ground vehicles using a swarm of UAVs integrated with an obstacle avoidance system.

The EC contributes €4.5 million ($5 million) to the €6.2 million EC-Safemobil effort, and the group working on the project also includes Indra, Selex, DLR, Airbus Defence & Space, the University of Duisberg-Essen in Germany and the University of Zagreb in Croatia.