Yates Electrospace unveiled at the Defense & Security Equipment International (DSEI) show in London a larger variant of its unmanned cargo glider, the Silent Arrow GD-2000, that can fly with a gross weight of 907kg (2,000lb).

The US-based company says it will start full-rate production in October and has contractual commitments for 3,020 aircraft.

The Silent Arrow is essentially a 2.43m (8ft)-long rectangular box with two-sets of attachable wings, a nose cone and tail assembly. The wings, nose cone and tail can be packed inside the aircraft’s fuselage for shipping. The UAV has a cargo volume of .75cb m (26cb ft). 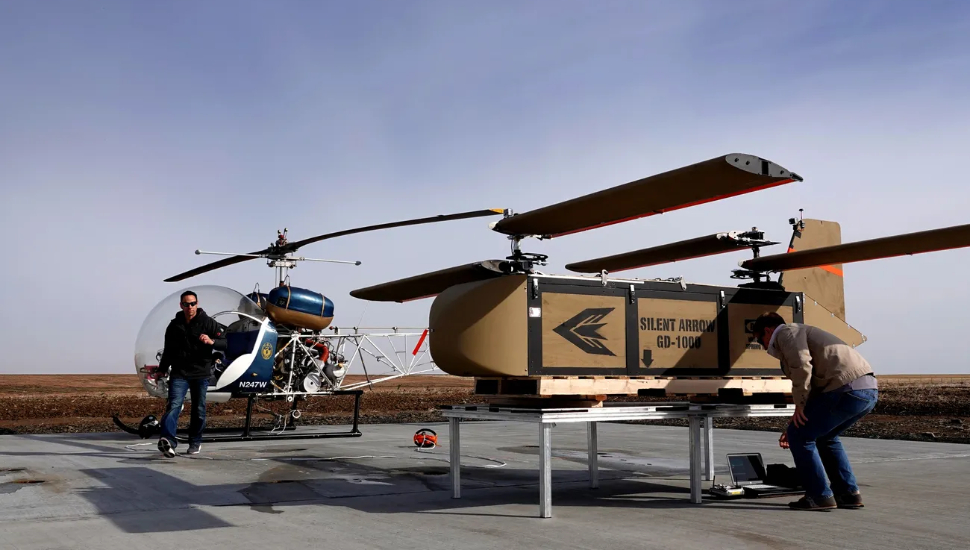 Yates Electrospace Silent Arrow GD-1000, an earlier version of the company's glider product, is prepared for a helicopter drop

The glide drone can be dropped from a Boeing C-17, Lockheed Martin C-130, Sikorsky CH-53, Bell Boeing V-22, as well as various side-door aircraft or from below a helicopter using a sling, says Yates Electrospace. It is designed to be used to resupply troops in hostile or austere locations with weapons, ammunition, equipment or food.

Yates Electrospace’s largest order is from a foreign military launch customer, though the company says it is unauthorised to disclose that client’s name. Other customers are US Air Force Special Operations Command and US Army 160th Special Operations Aviation Regiment. The US Marine Corps (USMC) in 2017 also awarded the company a demonstration contract for a smaller, 454kg (1,000lb) gross weight, glider UAV.

“Since then we found that with a few modifications, we could up the total gross weight to 2,000lb, 1,630lb of which is payload,” says Chip Yates, chief executive officer of Yates Electrospace. “So, this first product is called the GD-2000, for Glider Disposable 2,000lb Gross.”

Yates Electrospace is headquartered in Aliso Viejo, California, but the firm says it is outsourcing production of the gliders to the MEL Group of the UK. The company plans to start full-rate production at 125 aircraft per month.

“The MEL Group proved to be the best from a pool of possible contract manufacturers, including US-based companies,” says Yates. “They are handling AS9100, UK MoD, DAOS, etc., and are amazing partners.”

The firm says it plans to expand its product line to include single-use, reusable, scaled-down, scaled-up, unpowered gliders and electrically powered cargo UAVs. And, in addition to military customers, the company is targeting the humanitarian and disaster relief markets. Yates Electrospace is competing against Airborne Systems’ Joint Precision Airdrop System, a GPS-guided cargo parachute that the USMC has ordered.