Dutch defence ministerJeanine Hennis-Plasschaert has sent a letter to the nation’s parliament regarding a decision to postpone acceptance of the country’s final seven NH Industries (NHI) NH90s in the NFH naval variant, until a suitable solution for corrosion problems found on its earlier examples and financial compensation for additional costs have been agreed.

The problems were first noted when two helicopters returned from missions in a maritime environment in 2013 and underwent regular inspection. One was operating an anti-piracy mission off the coast of Somalia, while the other had been on patrol in the Caribbean Sea on board a Royal Netherlands Navy frigate. Both assignments lasted around five to six months.

Tasked by the defence ministry, the Dutch National Aerospace Laboratory in May reported its findings from an investigation into 92 corrosion occurrences.The laboratory concluded the design of the helicopter made it possible for water to collect without the possibility for draining, that the NFH had not been built as designed and that protective coatings and insulation intended to prevent galvanic corrosion had been improperly used. 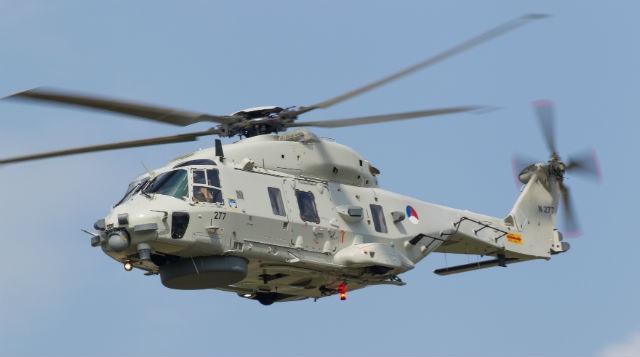 Its findings wereshared with the NATO Helicopter Management Agency (NAHEMA), which asked NHI to recommend a corrosion prevention programme to be adopted by the Royal Netherlands Air Force. At a meeting of the steering committee of NH90 partner nations in April, France indicated it had also experienced the same type of corrosion problems.

NHI says it has developed technical solutions for around 60% of the problems identified following the prolonged use of the embarked NFH, and that these are being incorporated in helicopters currently under construction. The consortium says it has told NAHEMA it expects to be able to provide a roadmap with the solution for all problems in September 2014.

While it is still waiting for a final agreement, the RNAF will continue to use the NH90 in support of NATO-led anti-piracy missions off the coast of Africa. However, the type is not expected to be used in the Caribbean again before 2017.