The fatal crash of a Xian MA60 aircraft operated by Indonesian carrier Merpati Nusantara in 2011 has been attributed to the crew's failure to adhere to standard operating procedures and their loss of situational awareness.

The aircraft, registration PK-MZK, was operating on the Sorong-Kaimana route on 7 May 2011. As it was preparing to land, the weather at Kaimana was overcast with showers, says a final report from Indonesia's National Transportation Safety Committee (NTSC).

The poor weather had reduced visibility around the airport to just 2km. Although the Director General of Civil Aviation (DGCA) and Merpati require a visibility of 5km for a visual approach, the crew ignored this requirement. Kaimana is also not equipped for instrument approaches.

During the flight, the co-pilot was acting as pilot-in-command. When the aircraft was on final approach, however, the pilot took command of the aircraft. The reasons for this are unclear, but the NTSC says the change may have "[increased] crew workload at a critical phase of flight."

As the aircraft approached the airport, the pilot asked the co-pilot three times whether he could see the runway. The co-pilot replied that he could not. 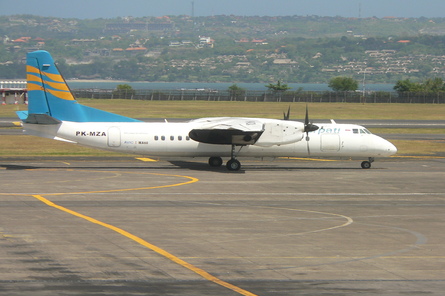 Upon reaching 550ft pressure altitude, the landing gear was retracted and its bank angle increased to 33 degrees to the left. This grew to 38 degrees, after which the aircraft rapidly descended into the sea, killing all 19 passengers and six crewmembers.

The NTSC attributed the rapid descent to a high bank angle, the retraction of flaps to zero, engine torque, low airspeed and the aircraft's nose-down pitch. The crew also lost situational awareness as they peered out the window attempting to locate the runway.

The NTSC report cited the pilots' inexperience with the MA60. The pilot had just 199 hours on the type and the co-pilot, 234. Merpati's safety division requires a pilot to have 250 hours on a type to be considered an "experienced pilot".

The NTSC said the pilots failed to conduct an approach briefing and landing checklist. It also found that communication between the two was limited.

One possible issue the NTSC pointed to was the use of non-standard English aviation language in both the flight crew operations and aircraft maintenance manuals.

Generally, it recommends that the DGCA review the adequacy of airline training, crew pairing policies and safety management systems.