Deliveries of the Korea Aerospace Industries (KAI) KUH-1 Surion helicopter and its variants are back on track after the fatal crash of a marine variant in July 2018. Still, there are few signs of a coveted overseas sale for the Korean medium utility helicopter, after it lost a Philippines deal that appeared to be in reach.

Nonetheless, KAI's operating profit for the second quarter more than tripled to W931 billion ($76 million) the company says, due mainly to the resumption of deliveries of the type.

“The delivery of Surion helicopters both to the army and marine corps has been put back on track, helping to increase revenue and profits,” says a company spokesman. “The sale of civil variants is also increasing steadily.”

KAI has handed over 90 KUH-1s to the army, and is producing 72 more units under a third-phase contract signed in 2016. The company is scheduled to supply the army with at least 200 KUH-1s.

The company also signed a deal in 2016 to deliver 36 examples of the rotorcraft's marine version, the MUH-1 Marineon, to the marine corps by 2023. Eight medevac helicopters are also being delivered to the military under a 2018 contract.

A joint investigation into the July 2018 accident that killed five of the six marines on board a MUH-1 indicated defects in the French-made main rotor mast supplied by Airbus Helicopters. As a result, KAI and the Defense Acquisition Program Administration (DAPA) say the French government is now assisting in the certification of Surion parts that are imported to South Korea from Airbus Helicopters.

With the issue resolved, the Surion fleet resumed flights – but the accident dealt a blow to domestic sales of parapublic variants, as well as to a promising sales campaign in the Philippines, a contract that ended up going to the Sikorsky S-70i.

Still, KAI remains hopeful that the Surion will win orders from other Southeast Asian nations that have bought fixed wing aircraft produced by KAI – such as the KT-1 basic trainer and T-50 advanced jet trainer – in the past.

“The Surion has been pitched to nations operating the KT-1 basic trainer aircraft or the variants of the T-50 supersonic trainer jet,” says KAI. “As the countries have used KAI-built aircraft, we believe they have trust in our products.”

Industry sources say KAI is eyeing Indonesia as the international launch customer of the Surion, as the Southeast Asian nation has a requirement for 100 medium-lift helicopters and is a major arms trade partner with South Korea.

“The competition for the Philippines Army was largely affected by the crash of the MUH-1, but we believe the Surion still has competitiveness in terms of the price and performance, as the reported defects and problems have been cleared,” a KAI official involved in the export of helicopters tells FlightGlobal.

Domestically, sales opportunities are improving, with a local report in June 2019 indicating that the army would order as many as 130 more KUH-1s in addition to the 200 units it already has on order.

A senior KAI source tells FlightGlobal that the decision to produce more KUH-1s is partly informed by a desire to sustain the domestic aircraft industry. The plan is also in line with the army’s intention to turn its frontline infantry units into an air assault force, equipped with multi-role utility helicopters.

“Parties concerned are on the same page – that more Surions should be deployed in the field from the perspective of industry and force transformation,” the source says. “But it will still be a long process to produce more Surions. If it proceeds, the number could be adjusted depending on the budget situation.”

On the civilian helicopter front, KAI hopes to get more parapublic variants into the domestic market.

In November 2018, KAI signed a new contract to supply one more maritime patrol derivative to the Korea Coast Guard, which bought two Surion-based helicopters for maritime patrol and rescue missions in 2016.

“With the proven performance and advantages of local logistic support, Surion derivatives for parapublic missions are expected to get more orders in the coming years in the local public helicopter market,” KAI says.

KAI has developed derivatives for police patrol, firefighting, mountain rescue, and maritime search and rescue. The parapublic variants are fitted with specific equipment to meet the requirements of the each service, such as an electro-optical/infrared camera for the police; an integrated avionics suite and search radar for the coast guard; a water tank and an emergency medical services kit for firefighting; and a three-dimensional electronic terrain map for the forest service.

The Korea National Police Agency has ordered eight “Chamsuri” variants for airborne law enforcement and various other missions including medical evacuation and search and rescue. The Korea Forest Service has ordered one, and the Fire Safety Headquarters of Jeju Special Self-Governing Province has also acquired a single example.

KAI is planning to add another derivative for air medical services. South Gyeongsang Province, KAI's home province, has announced it is intending to acquire an air ambulance from KAI by 2021 and, highlighting its ability to carry out so-called “Dr Helicopter” modifications, the company delivered an air ambulance based on the H225 to Gyeonggi Province in late August.

“The air ambulance is a new derivative of the KUH-1 and it’s a symbolic product. The Korean utility helicopter will also be an effective platform to save the lives of people. We hope a formal contract will be signed soon for the first Surion Dr Helicopter,” the company says. 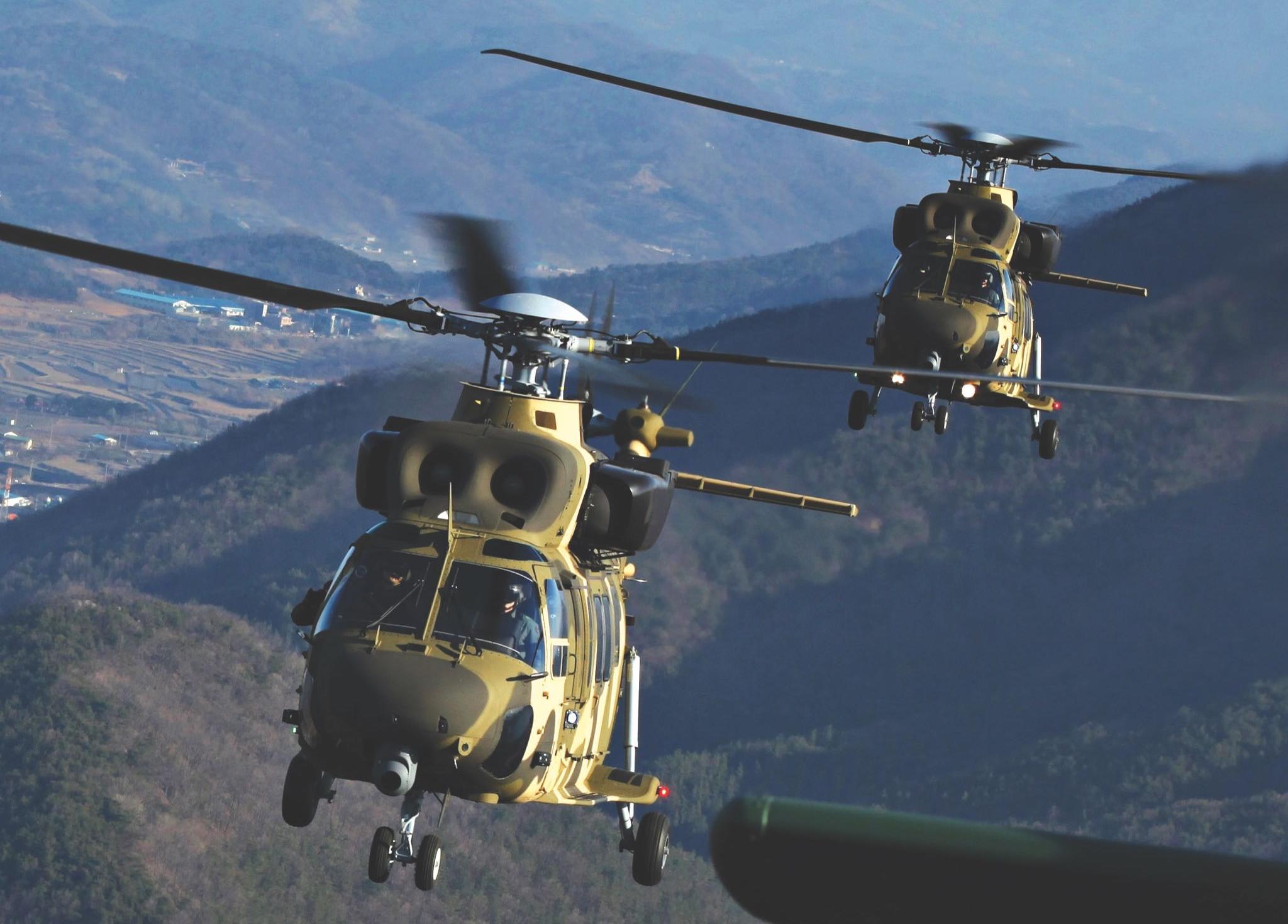 Korean army has received 90 KUJ-1s, with 72 in production