The Chicago-based company delivered 39 aircraft to military service customers in the period, down from 60 in the first quarter of 2019, it says on 14 April. 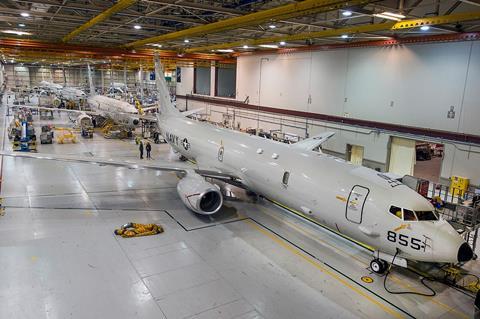 P-8 on the production line

However, the 2020 first quarter total was still more than the company’s slowest quarter last year. In the second quarter of 2019, it only delivered 36 aircraft, partly reflecting production problems with its KC-46A Pegasus in-flight refuelling aircraft.

In the most-recent quarter, Boeing’s production of the AH-64 Apache attack helicopter was down by 12 units in the quarter compared to a year earlier. Production quantities of the company’s other aircraft were also all down by a few units.

Boeing’s production facilities were not impacted by the coronavirus for most of the first quarter of 2020, though it did shut down its Puget Sound facilities in Washington state on 25 March. Those facilities make the KC-46A tanker and the P-8A Poseidon maritime patrol aircraft, as well as commercial aircraft, such as 737 Max, 777 and 787.

The company announced on 10 April that it was to restart production of the KC-46A and P-8A on 13 April. The Department of Defense (DoD) has given quarantine exemptions to manufacturers of military equipment, citing the continued production of the defence products as essential to the USA’s national security.

Boeing also suspended work at its Philadelphia, Pennsylvania, facilities for two weeks starting 3 April due to the coronavirus pandemic. At those sites the company makes the CH-47 Chinook cargo helicopter and the Bell Boeing V-22 Osprey tiltrotor. That suspension started in the second quarter.

The company’s military business unit, Boeing Defense Space & Security, manufactures a mix of military variants of commercial aircraft as well as upgraded Cold War-era aircraft. For example, the P-8A maritime patrol aircraft is based on the the 737-800ERX. The company’s legacy F-15 fighter recently was upgraded to the -EX variant.

The number of military aircraft Boeing has delivered over the past five quarters has varied widely. That reflects production issues with the KC-46A as well as inconsistent levels of DoD commitment for purchasing some older aircraft. The Pentagon is pushing to modernise its fleet with new types of aircraft.

For example, the US Army had planned to stop buying the Block II variant of the CH-47 in fiscal year 2020. The service wants to use the money saved to fund development of new rotorcraft in its Future Vertical Lift initiative, the Future Long Range Assault Aircraft and the Future Attack Reconnaissance Aircraft.

The US Congress and Boeing had pushed back on the idea because it might force the closure of the production line. However, Bruce Jette, assistant secretary of the US Army for acquisition, logistics and technology, said in March that foreign orders of the twin-rotor helicopter should sustain the production line until 2025.