Amid criticism from the US Air Force that it is moving too slowly towards fixing the KC-46A Pegasus in-flight refuelling tanker Boeing is touting incremental improvements that is says should help get its troubled programme back on track.

Amid criticism from the US Air Force that it is moving too slowly towards fixing the KC-46A Pegasus in-flight refuelling tanker Boeing is touting incremental improvements that is says should help get its troubled programme back on track.

The Boeing KC-46A aircraft is beset by three category one deficiencies: problems which could cause injury, death, aircraft damage or restricted combat operations. The issues include deficiencies with the aircraft’ remote vision system (RVS), its refuelling boom and cargo floor restraint locks.

Boeing believes it is within striking distance of fixing one of those problems: cargo floor restraint locks which have jostled partially unlocked during flight, an issue which could lead to pallets coming loose. 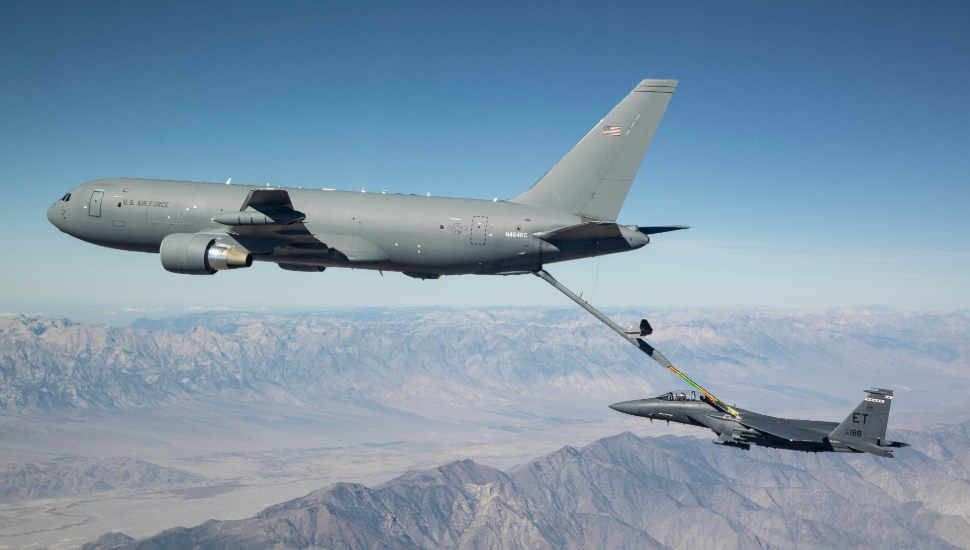 The company says it plans to retrofit the restraints with a secondary lock to hold the first lock in place.

“We've developed a design solution for it, fabricated hardware, tested the hardware – both in our lab environment as well as in flight – and determine the final solution,” says Boeing KC-46A programme director James Burgess. “That is going through the final phases of certification now.”

The company declines to give a specific timeline for completing the retrofits, noting that the schedule will be dictated by the USAF. However, it says the retrofitting process should start “soon”.

In September, Boeing and the USAF also agreed to technical standards to judge its proposed fixes to the KC-46A’s RVS – the camera-based technology that helps crew guide a refuelling boom to receiving aircraft.

The RVS has two problems: a 3-D video display system that distorts images and leads to depth perception problems for operators trying to guide booms into receiving aircraft; and a problem automatically adjusting to changing lighting conditions.

“It's primarily when you're looking directly into the Sun or directly away from the Sun – when the Sun's at a low angle, casting a shadow,” says Burgess of the RVS’ difficulty adjusting to changing lighting.

Boeing plans to upgrade the camera system’s ability to automatically adjust contrast and resolution as lighting conditions change. The image distortion issues will be addressed with improvements to the camera lenses, new algorithms and additional computing power to process image data, says Burgess.

Over the past several months, disagreement with the USAF on how the RVS should be judged was a major obstacle in fixing the cameras.

“Now that set of quantified requirements has been established, at this point, it will be a matter of both hardware and software development,” Burgess says “And then, the certification of that hardware and software [will happen] together before it can be released, as a retrofit to the KC-46 fleet.”

Boeing’s proposed RVS fixes are in the preliminary design phases, he says.

“We’ve submitted design concepts to the Air Force and gotten lots of good feedback,” says Burgess. “Our teams work together on a daily basis.”

The company is aiming for a preliminary design review of the RVS in the early part of next year and a critical design review toward the end of 2020.

Boeing is also in the preliminary design phase of changing the boom actuator system on the KC-46A, which is doesn’t connect properly to the Fairchild Republic A-10 Thunderbolt II. The A-10 doesn’t have enough engine power to push into the boom and compress the actuator, especially at high altitudes or when it is weighed down with weapons, says Burgess.

The force needed to compress the boom into the A-10 wasn’t spelled out properly by the USAF in its programme requirements, so that category one deficiency is being fixed at the service’s expense. The boom actuator will likely be fixed on a timeline that is similar to the RVS, says Burgess.

Boeing has also had trouble getting the US Federal Aviation Administration (FAA) to certificate aerial refuelling pods made by Cobham. Aerial refueling pods had not been certificated by the FAA before and Boeing says it underestimated the time needed to gather all of the required data. The company believes the pods should receive certification by June 2020.

Despite lingering issues the USAF transitioned the Boeing KC-46A into Initial Operational Test and Evaluation (IOT&E) on 22 October. IOT&E is intended to test the KC-46A’s effectiveness, suitability and capabilities for its three primary missions: air-to-air refueling, cargo and passenger operations, and medical evacuation.

The service says it decided to move forward with IOT&E despite the tanker’s lack of full functionality as it thinks running the process in parallel with Boeing’s retrofit work would be the fastest way to achieve full operational capability in the long term.

As of 25 October, Boeing had delivered 23 KC-46A tankers to the USAF. The company is now on contract for 67 tankers. It aims to continue delivering about three to four aircraft per month in the near term.

Boeing is playing catchup on its original delivery schedule. It was on contract to deliver the first 18 fully capable aircraft by August 2017.

The company plans to decrease its delivery rate sometime next year when it catches up on its original timetable, says Burgess.

After getting the programme’s delivery plan back on track, Boeing will need to resolve the aircraft’s lingering deficiencies with designs approved by the USAF as well as work with the service to complete IOT&E. Under that current timeline, the aircraft should be approved, retrofitted and introduced into service by 2022 or 2023, says Burgess.