The US Senate confirmed Lloyd Austin as the USA’s first African American secretary of defence on 22 January.

The legislative chamber confirmed President Joe Biden’s choice to lead the Department of Defense (DoD) in a 93-2 vote. In its 73-year history, the Pentagon has never been led by an African American. Austin is the USA’s 28th secretary of defence. 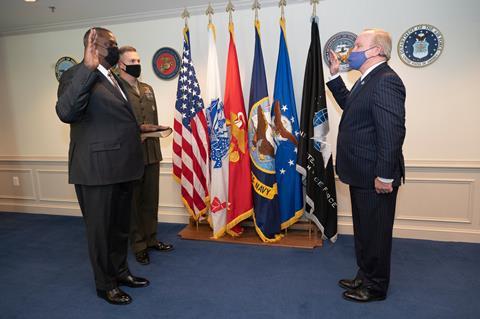 As a four-star US Army general who retired in 2016, Austin needed a special waiver from the US House of Representatives and US Senate to serve as the defence secretary. US federal law mandates a seven-year waiting period before military personal can serve in the DoD’s top role. That is meant to protect civilian control of the military.

Initially, some US Senators objected to giving another ex-general a waiver to lead the Pentagon. Former secretary of defence James Mattis received the same waiver in 2017, as he retired as a US Marine Corps general in 2013.

However, Austin’s reassurances in a US Senate confirmation hearing that he would maintain and respect civilian control within the Pentagon seemed to ease worries. He was granted a waiver by the US House of Representatives and US Senate with support from both parties.

A recent member of Raytheon Technologies’ board of directors, Austin said he would recuse himself from Pentagon decisions involving the company. He also said it was not likely that he would rejoin the defence industry after leaving the secretary of defence job.

The DoD says Austin’s first day on the job would start with a coronavirus briefing. The department is playing a leading role in Operation Warp Speed, an effort to develop, manufacture, buy and distribute vaccines.

After that, he is planned to speak by phone with NATO secretary general Jens Stoltenberg. Then he will receive operational briefings about China and the Middle East, says the Pentagon.

Austin assumes the Pentagon’s top job as the department is under enormous pressure from all sides. It is challenged to eliminate the coronavirus, stop domestic insurrections and riots, counter terrorist groups, deter rogue nations such as Iran and North Korea, as well as prepare for possible conflicts against so-called great power nations China and Russia. It must do all of this with a budget that is predicted to shrink, at least slightly, in the next few years due to the burden of federal government debt levels not seen since the end of the Second World War.

Those competing threats and budget constraints mean Austin will likely have to help President Biden make fateful decisions on what areas of the world and technologies the US military should prioritise. For instance, some analysts and former DoD officials see large military aviation efforts such as the Lockheed Martin F-35 and US Army’s Future Vertical Lift programme as vulnerable to cuts and delays.