The RFP will signal the start of the formal process towards a production contract with HAL, which has committed to begin deliveries within two years of contract signature. The Indian air force is also expected to issue its Staff Qualitative Requirements along with the RFP. 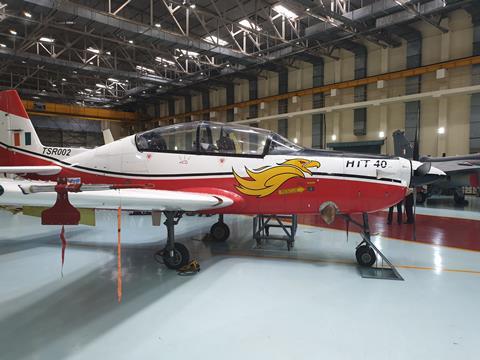 HTT-40 acquisitions will be split into an initial order for 70 of the type on completion of certification, followed by an additional 36 aircraft to be ordered on successful operation of the type.

The HTT-40 has completed spin trials with an Anti-Spin Parachute System, which required the installation of an anti-spin gantry that added about 250kg (551lb) to the prototype. Following the removal of the anti-spin gantry, efforts are underway to complete spin trials during another 10-15 test flights.

The air force has assigned a team of test pilots from its premier Aircraft and Systems Testing Establishment to undertake User Assisted Technical Trials (UATT). According to a senior official associated with the programme, phase one of these trials has been completed with phase two now under way.

The UATT work is intended to reduce the effort required during the subsequent User Evaluation Trials.