Raytheon plans to conduct a signals test between the Lockheed Martin F-35A and an expeditionary version of its Joint Precision Approach and Landing System (JPALS) for the US Air Force (USAF) at Nellis AFB in October.

The company had planned to do the test earlier this year, in March, but the event was delayed due to coronavirus restrictions, says CJ Jaynes, executive technical advisor with Raytheon. 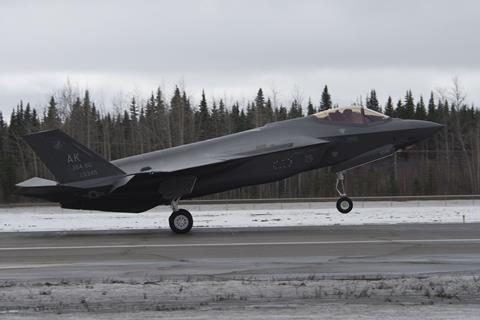 “We’re back on track to go in September and do the signal test with the F-35A, and then follow that up with a live demo,” she says. “If the air force understands just how well the F-35A will work with the expeditionary JPALS system, I think that’s the biggest hurdle we’ve got to get over right now.”

JPALS is a GPS-based guidance system that is pre-installed on all three variants of the F-35, as well as the US Navy’s (USN’s) Boeing MQ-25A Stingray, an unmanned in-flight refuelling tanker.

The system achieved initial operating capability (IOC) for the US Marine Corps’ (USMC’s) F-35B short take-off and vertical landing variant in 2018 and has deployed on amphibious assault ships. The system will reach IOC with the USN once a squadron of the carrier-variant F-35C deploys, says Raytheon. The system is installed on nuclear aircraft carriers.

In June, Raytheon delivered the first production unit of JPALS to the USN. The company had already delivered engineering development models to the service, which are now to be replaced with the production examples.

So that adversaries cannot detect the guidance system, JPALS uses an encrypted, jam-proof communications link between aircraft and ship.

The expeditionary version of JPALS is contained in small transit cases and can fit onto two or three pallets for airlifting, says Raytheon. The system can be set up and fully operational in less than 90min, the company says.

Raytheon is pitching expeditionary JPALS as useful for guiding the F-35A to land at remote, bare-bones airstrips. The USAF’s Agile Combat Employment strategy envisions dispersing operations on small airstrips so as to minimise the risk of multiple aircraft being destroyed on the ground by a cruise or ballistic missile attack from China or Russia.

Raytheon has interest in installing JPALS on other aircraft also.

The company is also looking at integrating JPALS on the USAF, USN and USMC variants of the Bell Boeing V-22 Osprey tiltrotor. Boeing is examining ways to put JPALS on the F/A-18E/F Super Hornet, says Jaynes.

International operators of the F-35 are also interested in activating JPALS, which is on their jets but not being used.

Raytheon has briefed the Finnish military on JPALS , says Jaynes; Helsinki is assessing candidates including the F-35A for its HX fighter requirement. The company is also working with Japan to put JPALS on the country’s two Izumo-class helicopter carriers: the Izumo and Kaga. The ships are to be retrofitted into aircraft carriers that will handle the F-35B. Japan’s V-22s could also be guided onto the Izumo-class carriers’ decks using JPALS, says Jaynes.