The HAWC variants are ready to fly freely before the end of 2020, the US Defense Advanced Research Projects Agency (DARPA) and the US Air Force (USAF), which run the programme jointly, said on 2 September. 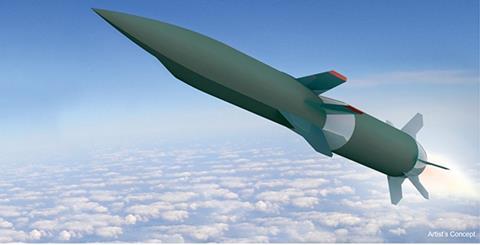 “Their upcoming flight tests will focus on hydrocarbon scramjet-powered propulsion and thermal management techniques to enable prolonged hypersonic cruise, in addition to affordable system designs and manufacturing approaches,” says DARPA. “The extensive flight data collected is intended to increase the confidence in air-breathing hypersonic systems and reduce the risks to potential future acquisition programmes across the US government.”

In addition to air-breathing scramjet-powered hypersonic cruise missiles, the US Department of Defense is funding development of boost-glide hypersonic missiles. Boost-glide weapons use a booster rocket to reach a near-space altitude, where a missile detaches, glides back to Earth at hypersonic speeds and impacts its target.

Captive-carry tests are among final steps before air-launching the two HAWC variants from an aircraft, says Andrew Knoedler, HAWC programme manager with DARPA. “These tests provide us a large measure of confidence – already well informed by years of simulation and wind tunnel work – that gives us faith the unique design path we embarked on will provide unmatched capability to US forces.”