UAV Turbines unveiled on 10 December a demonstrator hybrid-electric “microturbine” for small unmanned air vehicles (UAVs) that it says allows drones to harness the efficiency of a turbine and the quick power of an electric motor.

The Monarch Hybrid Range Extender is based on the company’s Monarch 5 turbine, a small turbine demonstrator the company unveiled in September in a Navmar Applied Sciences-made TigerShark, a small Group 3-size UAV usually powered by a piston engine. Group 3 UAVs are classified by the US Army as having a max gross takeoff weight of less than 600kg (1320lb). 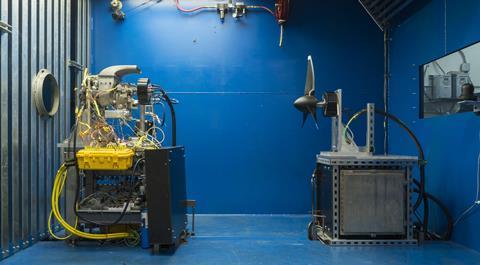 The use of electric-powered UAVs has increased dramatically in recent years by commercial and military operators as the cost of circuitry such as flight control equipment, electric motors and batteries has declined. In particular, quadcopters with electric propeller systems have proven simpler mechanically and easier to control than traditional piston or gas turbine helicopters.

However, electric-powered UAVs have limited flight duration due to the power output of batteries, which have less energy density than liquid fuel used by piston or turbine engines. UAV Turbines is promising the best of both worlds.

The company’s hybrid system uses a turbine to generate electricity, most of which is used to power electric motors that turn aircraft propellers, while the remaining electricity is siphoned off into a small battery. The system’s batteries serve as a reservoir of energy for flight manoeuvres that require extra power, such as vertical takeoff and landing.

“A common rule of thumb is that liquid fuel contains at least 50 [times] as much energy per weight as batteries,” the company says. “The battery is your sprinter, full of explosive power, while the turbogenerator is your marathoner, lean and efficient.”

The Monarch Hybrid Range Extender can provide UAVs with up to 33shp (25kW), says Fred Frigerio, senior vice-president of engineering with UAV Turbines. The engine weights around 27kg and the total hybrid system weighs closer to 54kg. 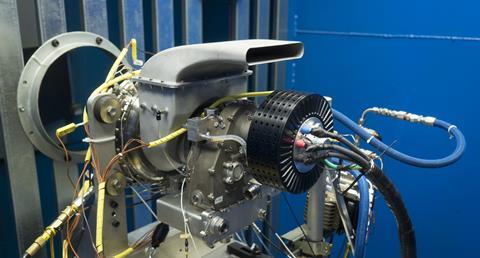 “Instead of having a shaft doing power transmission, you have cables going into an electric motor,” he explains.

In addition to having fewer hefty mechanics, weight is saved by carrying smaller batteries and relying on liquid fuel, which burns off during flight, says Frigerio.

Much of UAV Turbine’s technology was developed as part of US Army programmes such as the service’s 2000s-era modernisation effort called Future Combat Systems and its Small Unmanned Aerial Vehicle Engine programme, says Frigerio.

The company does not have any customers for the hybrid turbine, emphasising it is a demonstrator that is not optimised to specific applications. Early interest in the system has predominately come from the US military, though the company is also pitching it as a powerplant for commercial UAV cargo applications, says Frigerio.