Some will feel a slight tingling sensation. Others will feel nothing at all.

The electrode placed inside the ear canal is not designed to shock. Rather, the US Air Force Research Laboratory (ARFL) believes the earbud-like device, when placed next to the brain’s vagus nerve, will have more of an intellectually stimulating effect. It ought to create moments of super learning, controllable periods of focus that allow pilots to soak up their flight training faster than previously humanly possible. 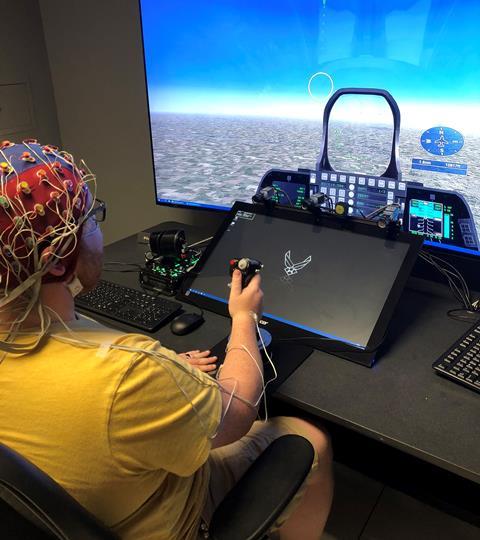 Subjects’ brain activity was observed during prior experiment

In August, the AFRL’s 711th Human Performance Wing launched its Individualized Neural Learning System (iNeuraLS) project, an effort to speed up pilot training through brain stimulation. The US Air Force (USAF) has been dogged for years by a pilot shortage and hopes the technology can help it quickly refill its ranks.

But more than quickly onboarding new pilots, the USAF is interested in brain stimulation, known as neuromodulation, as a means to help pilots constantly add new skills. As the pace of change within aerial warfare continues to accelerate – for example, with the addition of artificially intelligent loyal wingman air vehicles – air forces that can readily learn new skills and technologies will have an edge over their adversaries.

“We’re thinking about making our workforce adaptable to change,” says Nathaniel Bridges, AFRL research biomedical engineer and neural interface team lead. “The goal is to develop and to deliver a technology that’s going to allow them to apply that [new] knowledge as quickly as possible.”

Neuromodulation is used for a wide variety of medical applications including treating chronic pain, Parkinson’s disease and traumatic brain injuries. Cochlear implants, which use electrodes to transmit signals to a deaf person’s cochlear nerve, are perhaps the best-known example of the technology.

Cochlear implants rely on the surgical implant of electrodes under the skin behind a person’s ear and are considered invasive. Elon Musk’s Neuralink, which aims to help people with paralysis via on-the-brain electrodes, is another example of invasive neuromodulation.

For its part, the AFRL does not believe drilling into a pilot’s skull is necessary. The laboratory’s electrode earbud will instead stimulate a branch of the vagus nerve that extends to the human ear.

“It injects a small amount of current in your brain through your scalp, through your skull,” Gaurav Sharma, senior technical lead for cognitive neurocience at AFRL. “It can change brain connectivity or stimulate a particular area in the brain.”

While the earbud is pushing milliamps worth of electrical current into a subject’s brain, the AFRL will attempt to teach piloting skills using a virtual reality headset with flight controls such as a joystick, throttle and rudders. Later, the subject will be asked to demonstrate what they have learned. “We can pull out different measures, like, ‘How accurately did you perform that manoeuvre?’” says Bridges.

The AFRL plans to compare a subject’s mastery of piloting skills to electric and magnetic field activity in their brain using a cap or a helmet that contains an array of special sensors. The laboratory will look for patterns during different stages of learning, as well as watch for changes in variables such as attention, memory and fatigue.

A series of experiments are planned to take place over the next three years using groups of 20 to 30 non-pilot volunteers at Wright-Patterson AFB in Ohio. “The intent is to illustrate the capability to accelerate learning in individuals who have little to no flight experience,” says Bridges.

The 711th Human Performance Wing believes the technology could also be applied for training unrelated to piloting, for example, for personnel within the Space Force, as well as workers within intelligence, surveillance and reconnaissance, maintenance and medical communities.

Using information gathered, the laboratory plans to use algorithms to correlate certain patterns of brain activity to the optimal development of piloting skills . The experiment’s machine learning algorithms will be pioneered by Massachusetts Institute of Technology’s Lincoln Laboratory, a federally funded research and development centre for national security technologies.

Eventually, the AFRL wants to determine the most-effective means of boosting learning, either via neuromodulation or altering the surrounding environment using immersive technologies such as virtual reality or augmented reality headsets.

The AFRL believes use of realistic training tools, such as a virtual reality headset, coupled with neuromodulation, will lead to leaps in skill development. “A combination of these technologies can lead to a multiplicative increase, and not an incremental increase, in the training rate”, says Sharma.

Overtime, the AFRL expects to find individual patterns of learning. Knowing those particularities, it believes one day it could tailor electrical stimulus and curriculum to improve the training of each particular pilot.

“A lot of technologies today are one size fits all,” says Bridges. “The reality is, we’re all different as individuals. And so, the more information we can use and acquire that relates to those individual differences, the better we can tailor the technology and learning to that individual.”

During its experiment the AFRL plans to closely control and track what is the optimal electrical frequency and amplitude for brain stimulation, and how long the effects of the neuromodulation last.

“It depends on the task that you are doing,” says Sharma. “In some of the studies, we found that when we did stimulation for two hours the effect lasted for like 16 days.” In another clinical setting that aimed at treating a bleeding disorder the effect lasted six months, he adds.

The scientists say past experience with neuromodulation experiments and strict procedures will keep subjects safe from harm.

“In case we see something bad happening, which I don’t think we will, we will have the ability to shut it off because it is controlled in a closed-loop fashion,” says Sharma, noting the real-time brain activity measurements. “We have implemented a number of these technologies in our past projects on similar ideas of improving performance, so their safety is very well established.”

The iNeuraLS experiment is to culminate in 2023 with a demonstration where participants will train to perform different flight manoeuvres with a virtual reality-enabled flight simulator. The ultimate aim is to show a reduction in the amount of time it takes for the participants to learn the skills compared to a control group, says Bridges.

The AFRL team also plans to create an integrated brain stimulus and mapping device by the end of the project.

“Ultimately, we will be able to translate this technology into something that can be used in an operationally relevant environment, like in an aircraft,” says Sharma. “However, there are different things that we need to consider, for example, are these materials going to hold in the high-g environment that an aircraft has to go through.” 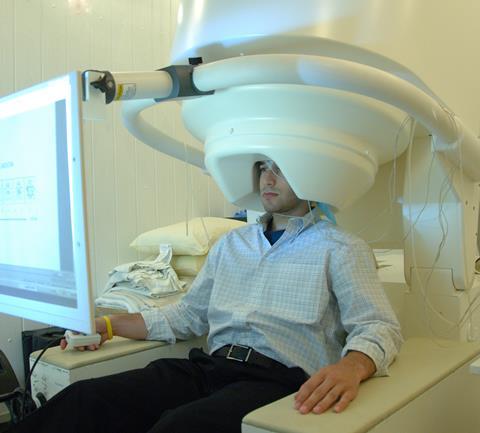 Magnetoencephalography scanner with patient from National Institute of Mental Health

To shrink the technology, the 711th Human Performance Wing is working with the AFRL’s Materials and Manufacturing Directorate and start-up Sonera Magnetics to develop a new compact sensor array for mapping the brain’s magnetic fields.

“They are coming up with new materials that will allow us to get the immediate signal with good spatial and temporal resolution, but still in a wearable, portable format, which may not require that kind of a shielded room to record that activity,” says Sharma.

The 711th Human Performance Wing is also partnering with Microsoft, which will manage content delivery and will provide guidance on changes in virtual and augmented reality platforms and hardware. Teledyne Technologies will integrate the brain mapping and stimulating components into one device.

Ultimately, AFRL scientists hope the iNeuraLS project is a stepping stone toward a mind meld between man and machine, a futuristic application which might enable a pilot to control loyal wingmen using his brain.

“If we can validate some of the core components of the technology that we are pursuing in the project, that can have applications beyond training,” says Sharma. “Can this improve the communication or the symbiotic [relationship] between the man and machine?”